RBI Cut Rates by 0.25% in a surprise move today. We were surprised, and we have been watching RBI closely. Rates are down by 0.25%. 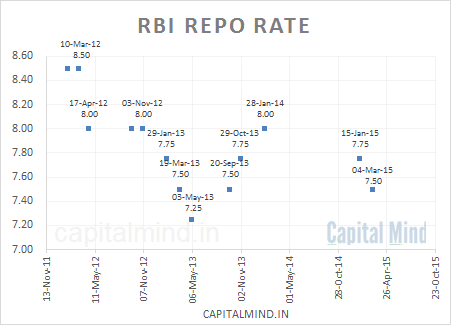 This brings rates to where Rajan had first raised them (on 20 Sep 13) when India was in the middle of a big crisis.

The Statement has this, emphasis mine:

The new CPI rebased to 2012 was released on February 12, 2015. Inflation in January 2015 at 5.1 per cent as measured by the new index was well within the target of 8 per cent for January 2015. Prices of vegetables declined and, hearteningly, inflation excluding food and fuel moderated in a broad-based manner to a new low. Thus, disinflation is evolving along the path set out by the Reserve Bank in January 2014 and, in fact, at a faster pace than earlier envisaged.

The uncertainties surrounding any inflation projection are, however, not insignificant. Oil prices have firmed up in recent weeks, and significant further strengthening, perhaps as a result of unanticipated geo-political events, will alter the inflation outlook. Other international commodity prices are expected to remain benign, given still-sluggish global demand conditions. Food prices will be affected by the seasonal upturn that typically occurs ahead of the south-west monsoon and, therefore, steps the government takes on food management will be critical in determining the inflation outlook. Finally, the possible spill over of volatility from international financial markets through exchange rate and asset prices channels is also still a significant risk.

Perhaps the most significant influences on near-term inflation will be the strength of aggregate demand relative to available capacity. Two recent developments pertaining to the demand-supply balance are the recently-released GDP estimates and the Union Budget for 2015-16.

The Central Statistical Organisation is to be commended on the changes it has made to the methodology of estimating GDP, bringing India up to international best practice. Yet the picture it presents of a robust economy, with growth having picked up significantly over the last three years, is at odds with still-low direct measures of growth of production, credit, imports and capacity utilisation as well as with anecdotal evidence on the state of the economic cycle. Nevertheless, the picture of a steadily recovering economy appears right.

The fiscal impulses in the Union Budget then assume importance. There are many important and valuable structural reforms embedded in this Budget, which will help improve supply over the medium term. In the short run, however, the postponement of fiscal consolidation to the 3 per cent target by one year will add to aggregate demand. At a time of accelerating economic recovery, this is, prima facie, a source for concern from the standpoint of aggregate demand management, especially with large borrowings intended for public sector enterprises.

Some factors mitigate the concern. The government has emphasized its desire to clean up legacy issues which gave a misleading picture of the true extent of fiscal rectitude, and has also moderated the optimism in its projections. To this extent, the true quantum of fiscal consolidation may be higher than in the headline numbers. Also, the government is transferring a significantly larger amount to the states, without entirely devolving responsibility for funding central programmes. To the extent that state budget deficits narrow, the general fiscal deficit will be lower. Furthermore, supported by lower international energy prices, there is a welcome intent to shift from spending on subsidies to spending on infrastructure, and to better target and further reduce subsidies through direct transfers. Finally, the central government has signed a memorandum with the Reserve Bank setting out clear inflation objectives for the latter. This makes explicit what was implicit before – that the government and the Reserve Bank have common objectives and that fiscal and monetary policy will work in a complementary way.

Finally, the rupee has remained strong relative to peer countries. While an excessively strong rupee is undesirable, it too creates disinflationary impulses. It bears repeating here that the Reserve Bank does not target a level for the exchange rate, nor does it have an overall target for foreign exchange reserves. It does intervene on occasion, in both directions, to reduce avoidable volatility in the exchange rate. Any reserve build-up is a residual consequence of such actions rather than a direct objective.

The guidance on policy action given in the fifth-bi-monthly monetary policy statement of December 2014 is largely unchanged. Further monetary actions will be conditioned by incoming data, especially on the easing of supply constraints, improved availability of key inputs such as power, land, minerals and infrastructure, continuing progress on high-quality fiscal consolidation, the pass through of past rate cuts into lending rates, the monsoon outturn and developments in the international environment.

What they’re saying, and we should have heeded earlier is:

We’ve been silly – till recently we kept saying the data is the prime source of RBI action and the data was indeed good. The recent data points of:

were our thought of why he might not cut just yet. But that’s going to affect inflation in the future, and I’m sure we get to wait until the effect happens.