RBI bought dollars by the truckload in January, it turns out. Over $12 billion was purchased in Jan 2015, which is the largest single month of dollar purchases since January 2008!

Even then the rupee appreciated from the 63.8 levels it saw end-December, to the 61.76 levels in January. 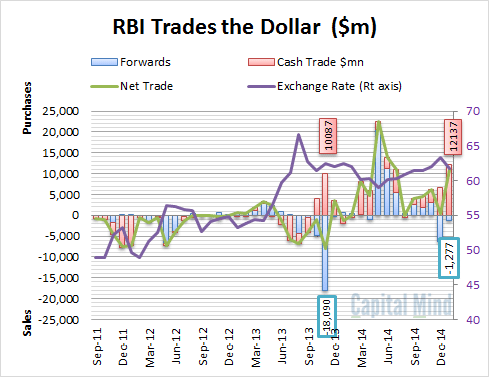 When RBI buys dollars, you would expect the rupee to fall, since the demand for dollars is high (with the RBI buying). And the rupee, therefore should fall. But the dollar fell and the rupee gained, which tells you how strong the incoming flow of dollars was – the demand for rupees was even higher. 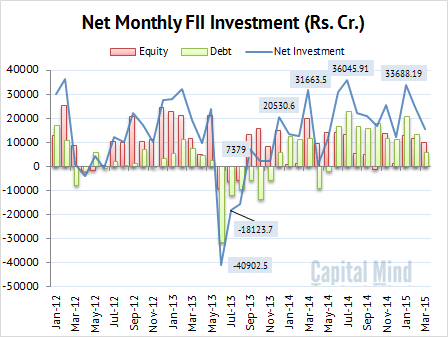 There’s something in here that doesn’t make sense:

What then has caused the rupee to appreciate? Higher remittances? Lower imports? These numbers too don’t match up.

There is a lot of weirdness going on around numbers these days – what we are being told are FII investments simply don’t match the direction of the dollar-rupee trade, or the market moves. A number of market players too are flummoxed. There is something fishy in there, but I can’t yet put my finger on it.

Anyhow, the final chart – the RBI has been cutting its exposure to forwards: 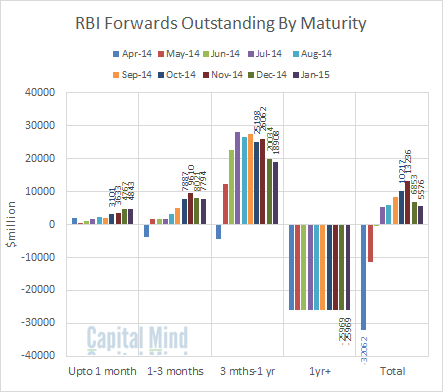 (Remember, the RBI has a massive $26 billion to pay back by November 2016 as part of the FCNR unwinding. (It had a 3 year FCNR swap for banks in Nov 2013 where it allowed banks to raise dollar deposits, giving them a fixed 3.5% hedge if they put those dollars with the RBI. The dollars are returnable in three years, which is Nov 2016)

The dollar forwards are down by $1.2 billion, which might have been converted to dollar spot holdings instead.

What Worries Us: Inflation!

The only thing to be worried about is:

The RBI just collects reserves. It has zero intention of selling dollars to protect the rupee on the downside (i.e. when the rupee falls) because it is too afraid to give up its precious reserves. But if the rupee should appreciate, it will immediately step in and buy. This is a sureshot recipe for inflation, and we have just managed to counter its effects (by smart control of the balance sheet by Rajan) till now. Will he now just give it all up and let us go back to the age of high inflation? 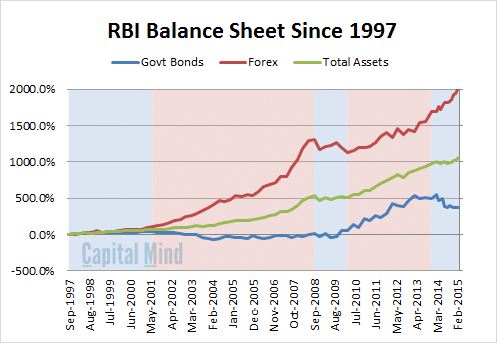 Note: Don’t get all bearish. Such posts are macro-economic and have very little to do with market responses on an immediate basis.