We’ve had the budget go by and the markets have soared. So what really is the impact of this budget? Our posts on Capital Mind have covered some of the regular aspects of the budget:

• Railway Budget: Big Plans in Store and Can You Open Your Pockets Please?

• Is there a 30,000 cr. debt swap planned for March? (Apparently there is, when the RBI will buy back near term bond for the government and substitute them with bonds of a very long term, like last year)

• We Just Missed Revenue Estimates by 63,000 Crores. And The Biggest Culprit: Service Tax

All of this will be in our “Budgetonomics” book coming out early this week.

What you should see is this: that we missed budget estimates big time.

The big miss was service tax. (Btw, the figures won’t add up to the last row, because I haven’t put in data on the state’s share, which reduces the total receipts)

And then, we are expecting quite a dramatic growth in service tax again this year, along with excise duty: 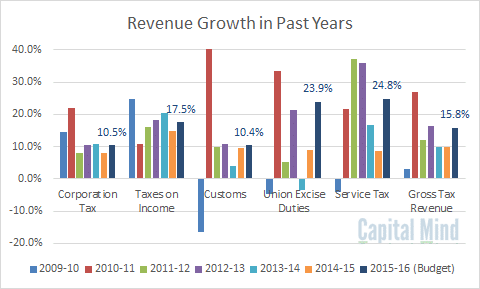 The Excise Duty increase (biggest in five years expected) is largely due to the increase in duties of Petrol and Diesel. However, should crude inch back up to $80 we are sure to see some of these duty hikes rolled back.

The Fiscal Problem and Bond Yields

In effect, the budget has a weird problem:

• The Fiscal deficit is targeted at 5.55 lakh crore, with about 70,000 cr. coming in from disinvestment.

It’s very very unlikely, in our opinion, that these numbers are met. If they are not met the government will either:

b) increase borrowing from the market.

Since foreign investors are full up on government bond limits, it’s going to be left to local investors to buy any higher issue of bonds. (And it’s been strange that the government has not effected an increase in limits)

If yields fall, they are likely to fall only on the euphoria of the current situation. However, bond market players are much more informed than their equity counterparts (and I don’t say this in a demeaning way, they have to be that way) and we might actually see a divergence between bonds and equity.

There’s only one reason RBI will keep its rate cuts going. That inflation will not rise again. We have seen it bottom out in November but the last two months, inflation has only increased. There are three risks to prices:

• Freight increase by the railway, which could increase prices across the board.

In addition, the fiscal headroom is way too little. While we expected a deficit of 3.6%, it’s been upped to 3.9%. And it’s 3.9% of a number they call the GDP, which is also looking quite high.

The current year’s nominal GDP is about 126 lakh crores. (This is from the very recent MOSPI release) Meaning, we expect to see a 12.5% jump in Nominal GDP.

The latest quarter (Q3) saw a year on year increase in nominal GDP of just 8.9%. Government expenditure (central) is budgeted to increase only marginally. Private expenditure is at 11% (and the biggest component) The numbers look difficult to achieve.

With the monetary policy keeping credit growth at 10% to 11% (which controls inflation), this looks tough. But RBI goes on current inflation data, which is low.

In our view, a 0.25% cut will happen in the coming months. We think this may wait till end-March or even April though.

Note: There is a troubling note about Monetary Policy being jointly decided by the government and RBI. This would be terrible for markets, because the government has a vested interest in keeping rates low. And the government likes inflation, because it inflates away debt and increases nominal growth which increases tax revenues. Markets however like fiscal prudence and will be wary (except in the west where they are happy to get money for free and hold governments hostage).

Our Broad Views on Equity

Equity markets remain buoyant and the general sentiment is that the budget is good. We can’t argue this on merits so let’s work with the momentum instead. Sentiment is a huge game changer, and no amount of analysis can change that. There are hardly any sectors that seem to be bearish due to the budget. Except tobacco.

ITC and Tobacco Companies are in trouble. The Budget has increased tobacco taxes by upto 25%, especially on shorter cigarettes. No wonder ITC was down 10% on Saturday.

Banks have been up huge, with a 3% rise on Saturday. Banks are a proxy for the economy, and bank stock price rises are a proxy for investor sentiment in the economy. In India, that means private sector banks. This is likely to continue – the worst for banks is still the NPA situation and the slowing economy, which will be glossed over in the short term.

There is no major increase in Defence Expenditure (about 10%), Roads and Infra, or in Education or Health. This is not positive for Defence stocks, which have run up recently. (Astra Micro, or even BEL)

There is just no boost for Real Estate. In terms of tax sops (by increasing limits for home loan interest or principal repayments that are tax exempt) or in terms of a higher push towards housing by subsidising costs. The government has no room for it, but this means the real estate bubble is more prone to crashing. Stocks however will respond to the general market sentiment, but these remain the weakest of the lot.

There was no specific focus on Wind power or Solar. We’ll just have to wait and see if past sops help them.

The generic increase in service taxes hurt the service economy. Plus costs in general are up. We have seen the weakest quarter in terms of Nifty company results (profits down 7% in total). The increase in costs will hurt the overall economy just as demand is high. If rates are cut, that provides a short term fillip, but the overall market valuation, compared to immediately visible results, is too high. We would be very careful riding this trend longer term, but the short term opportunity is to be long and stay long. (Any short bets should be money you are happy to lose) But only in the short term.

What we expected but did not happen:

• Arb funds did not get hosed. So our “what if” analysis didn’t really work out.

• Government spending is a huge surprise on the low side. Government expenses being capped means many things we expected (like infra revival) are unlikely to happen.

• We didn’t expect a social insurance scheme or a push towards social security, but for these, costs are not estimated or allocated.

• We thought there would be sops for Solar/Wind or Housing, even if we didn’t like them. We are happy to have been wrong.

We’ll have more. We will be adding more portfolio stocks this week, and rejigging some of the long term portfolio as well. On the Fixed Income portfolio, we’re doing another installment of investment, in continuation with the general feeling that rates will come down. If we see a real threat to rates falling, we’ll post a note.