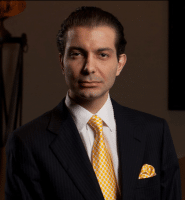 The 33-year-old New Yorker ran his own hedge fund, reporting assets of $100 million and eye-popping returns that won plaudits from several services that rank hedge funds. He explained he had honed his skills at top investment banks and a boutique trading firm.

A $1 billion deal to take his company public was in the works, he told investors, and he was hiring dozens of analysts and opening offices across the world, he said. In December, an industry publication reported on his successful launch of a second $100 million fund, called Wolf Hedge Global Strategy.

But Mr. Malik was a fraud, say New York prosecutors and the Securities and Exchange Commission. He only raised a fraction of the amounts he said he did, never made any real investments and used the money to pay for a lavish lifestyle, they say. The SEC accuses him of stealing more than $700,000 from investors. If Mr. Malik is convicted, his case would show how fraudsters can exploit fund-ranking services.

And then, one Buffett wannabe is supposedly milking his fund, taking $34 million as compensation last year even as the stock price of the company fell 20%. Sardar Biglari, founder of Biglari Holdings, a holding company that was supposed to mimic Warren Buffett on great returns, is in the news for doing something Buffett doesn’t – taking excessive money as compensation:

Biglari’s problems begin with CEO compensation, and are illustrative of the poor judgement and overreach that can ruin a business. Over the past six years, Mr. Biglari has been paid a total of $75.9 million, with his 2014 pay exceeding $34 million as annual operating income tumbled to a five-year low. How Biglari hoodwinked shareholders into such an arrangement is indicative of his company’s issues.

From the outset, Biglari wanted his Steak n Shake empire to evoke comparison to Berkshire, however, he didn’t want to be paid like Buffett, who takes a minuscule salary and derives virtually all of his net worth from the rising price of his Berkshire Hathaway shares. [Buffett dissolved his partnership when taking stockholder money in 1957].

By contrast, Biglari created an incentive deal that would guarantee he’d be paid like a hedge fund manager for running a restaurant company with one large stock holding.

In the quest for more yield, there will be some who’ll be attracted to fraudulent returns, and others to people who say one thing and do another.