Yet another IPO is here! This times it’s Adlabs Entertainment.

If you’re an old timer, you’re thinking, “What? Again?”

Manmohan Shetty is back. In his last avatar he headed Adlabs Films, which was sold to Reliance (Anil Ambani) and renamed Reliance Mediaworks, which delisted in 2014. That’s a different company – it processed films, owned and operated multiplex theaters and even an IMAX dome in Mumbai.

This one, Adlabs Entertainment, is about theme parks. We’ve seen theme parks earlier – as part of the Wonderla IPO, which we thought was a low priced IPO worth investing in. That stock has more than doubled, trading at Rs. 272 after the IPO at Rs. 125. (It opened in the markets at 160, we bought some, and exited after 230 or so)

What About This IPO?

Related Party Issues: Manmohan Shetty’s two daughters get paid Rs. 500,000 per month (each) for their consultancy and design services. That is higher than the gross compensation of their key executives and only marginally less than what they paid their CFO for FY 2014 (70 lakh per year approximately).

The company also has contracts to pay over 21 lakh rupees to Manmohan Shetty, per month, as rent. (But they haven’t used those properties recently, so no money was paid)

This is not a very big deal, but thought the public should know. It’s hidden in the print.

One park. Wonderla with three, and with an operational hotel, has done about Rs. 44 cr. of profits in nine months, and doesn’t have the debt burden. Adlabs has one park, will likely build one more, and has the only advantage that it’s close to Mumbai.

Adlabs is likely to struggle – it has to make 95 cr. of EBIDTA just to pay for the interest on the remaining loans after the IPO. The company gets Rs. 420 cr. from the IPO of which it will use 330 cr. to pay back loans. Of the remaining, we estimate about Rs. 20 cr. to Rs. 30 cr. will be issue expenses, and what’s left will be about Rs. 70 cr. which is not enough to make a huge difference in the future.

The company, in order to make this IPO worthwhile, would be at a 20 P/E number if

Essentially, the stock needs to see 2.5x revenue increases to only justify the IPO price. If we want the stock to double, we need to see an even more massive jump in revenue. Likely?

Wonderla is currently making about Rs. 200 cr. in revenues (trailing 12 months), in lower income cities (BLR, Cochin). Ticket prices are about half of what Adlabs charges (it charges Rs. 2000 per ticket, while Wonderla gets by with 1000 or so).

One bet could be property – which they plan to develop along side the park. We are not very kicked about property prices in such areas, or in fact anywhere in India nowadays.

This is ludicrously expensive for a company with one theme park, making losses, and which has very little chance of making the kind of money going forward. If you like these valuations you must buy a truckload of Wonderla, as it’s much cheaper in comparison.

Investors don’t seem to be kicked about it right now: 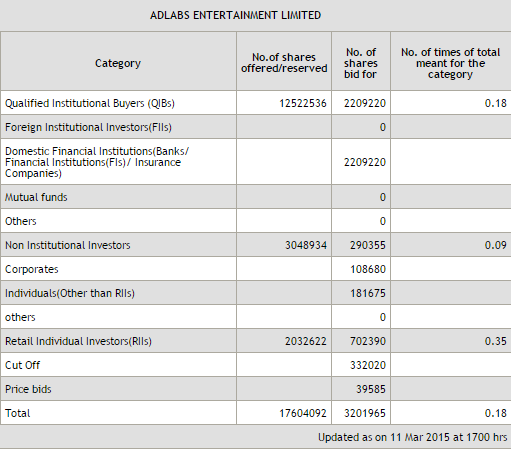 But of course the action’s all tomorrow, March 12, when the IPO closes.

But we’d like to take our kids there, for sure. Dinosaur boat ride sounds like fun! (But not at the Rs. 1900 per head price point)

Very important note: Look, we’re in a bull market. Any share can go up. In 2006, We didn’t like the GMR IPO issue. It went from 250 to 800. We looked like fools. Then after a 10:1 split the price is now less than Rs. 18 (which would be Rs. 180 for the 2006 IPO holders). That makes us look better. But remember, the price went 4x before it fell – anything can happen, don’t just trust us. We have effectively ditched a potential 4x return earlier. That’s our disclaimer.