India’s forex reserves hit a new high at $333 billion for the week ended 13 Feb 2015. This is the highest ever in terms of forex reserves that India’s held. Including known forex forward derivative exposure, we are at about $340 bn in the kitty. 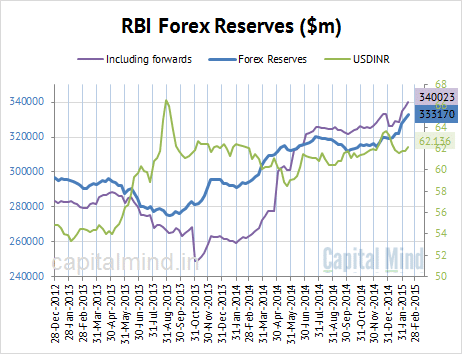 What’s Different About This? Forwards have been Unwound.

While this sounds like the RBI is purchasing dollars like crazy, this might have been the “unwinding of forward contracts”. RBI buys both in the cash market (and owns dollars outright, which reflects in the forex reserves) and in the forward market (where a buy will receive dollars at a future date, so it will be an “outstanding” buy). When that future date comes, the RBI can choose to buy the dollars and add to forex reserves, or roll it over to other forward contracts.

In December (that’s when we have the data last). We see that the RBI bought over $6.3 billion of dollars in the spot market (adding to forex reserves) and unwound and equivalent amount of dollars in the forward markets. 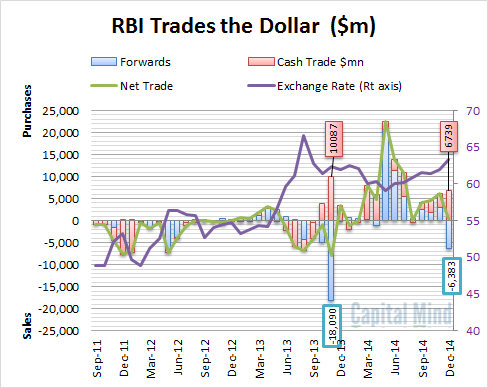 Regardless, the impact is the same – because whoever sold the RBI dollars in the forward market probably had to buy them in the spot market to make good on the delivery. And in December, the USDINR went up all the way to 63.33 (from 61.97 in the previous month).

Here’s how the forward exposure has looked, in December: 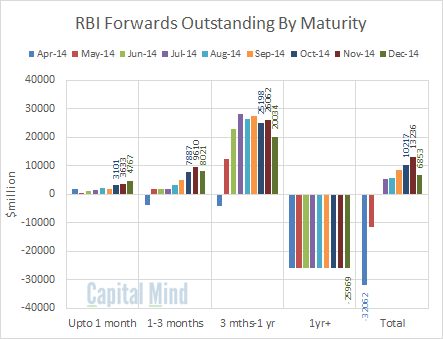 In effect, RBI unwound a longer term position (maturity bucket of 3 months to 1 year ahead) – as the shorter term buckets are more or less constant.

Total forward exposure remaining has fallen to $6.85bn. (Remember we have a long term exposure of $25 billion to be sold back, because the RBI FCNR swap in Sep-Nov 2013, which will mature in Nov 2016)

Impact: Recent Weakening of Rupee Likely From RBI Buying, Are We Forcing Devaluation?

RBI hasn’t really bought directly from the market in December, but its unwinding of forwards has caused the rupee to fall, surprisingly in December when everything was hunky dory.

The rupee has been sensitive to RBI action, and the recently after appreciating big time in January, the rupee has weakened marginally against the dollar (and pound!). 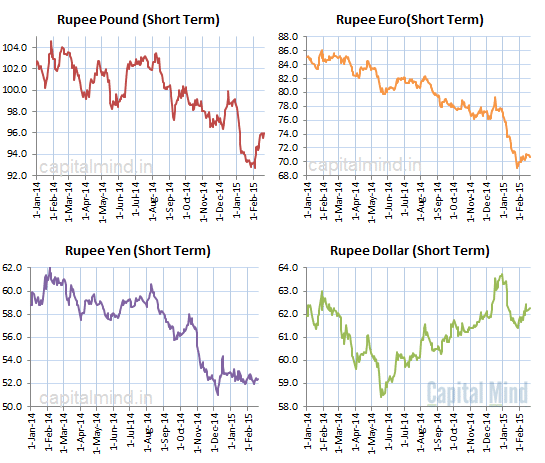 RBI’s purchasing has been high since January: 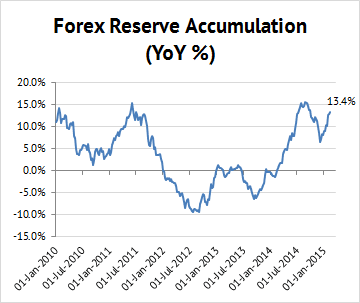 In January, FII’s were buying stocks like crazy. In feb they have mellowed down. Is RBI’s continued buying an attempt to devalue the rupee? This is likely to be the case – and the impact of RBI buying is much higher inflation (due to money printing, as RBI prints rupees to buy dollars). Just as we see the back of high inflation, such action could be potentially disastrous.