RBI has not cut the repo rate. At Capital Mind, we expected this – we said at the time of the last rate cut (in Mid-Jan):

RBI will continue to cut rates. But since the next meeting is only on Feb 3, 2015 it will not have more data points (next inflation data comes on Feb 12 or so) to decide. So we think it might not be the immediate next meeting (on Feb 3) but again, we will see a 25 bps cut in mid Feb.

That’s pretty much having nailed it for yet another time, and we’re quite happy we got that right. (Capital Mind Premium members got our note yesterday reaffirming our expectation they won’t cut). But we promise, that’s the end of the “we told you so” for this post!

What matters more is the stuff no one seems to want to talk about, but is really important.

Banks are required to hold government bonds. The limit is a percentage of their “Net Demand and Time Liabilities” (NDTL) which is basically the sum of all they deposits they own (current, savings account and fixed deposits). This limit has been falling recently, and has been cut from 22% to 21.5%.

The cut is good. Why? Because it’s silly for Indian banks to be forced to buy government bonds. They should do it out of their own volition, and because of the security they offer, not because it’s by the RBI holding them by the throat.

However, if you think that because of this cut, banks will have more money to lend, and therefore it’s good for banks, well, think again. Here’s the graph of how money has been put into government bonds, and the SLR limit: 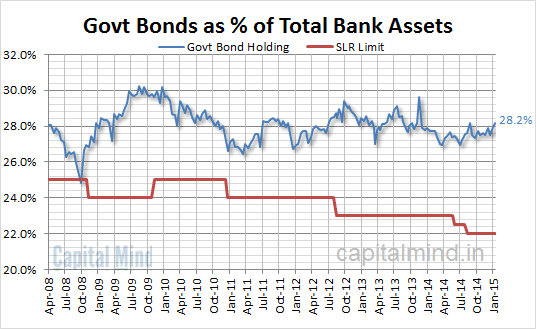 As you can see, banks keep very high levels of government bond investments, much higher than the SLR, and that movement is independent of the SLR. The current limit was 22%, and yet, banks had 28.2% in Government bonds. This cut won’t make any difference.

(Only once in the past have G-Sec investments come close to the limit, during the Lehman crisis.

Big Changes to Foreign Investments in Indian bonds: And Not All Good

Readers at Capital Mind will know that Foreign Portfolio Investors (FPIs) have maxed out their limits in investments in Government bonds, which is $30 bn, of which $5bn is for certain long term investors like insurers, pension funds, sovereign wealth funds etc. This limit remains the same, but of the $5bn limit, any coupon interest earned can be reinvested in G-Secs, even beyond the limit.

The bigger thing is that FPI investments in Corporate Bonds have been stalled. Foreign investors have a 10,000 cr. limit on short term commercial paper (less than 1 year). And the limit on Corporate debt as a whole is 244,000 cr. of which currently about 166,000 has been taken, a 68% utilization.

But the RBI has said that FPIs can no longer invest in shorter term commercial paper. All new FPI purchases should be for paper of a residual maturity of 3 years or more. (This condition already exists for government bonds, it’s now been brought into corporate bonds) This might reduce the demand for short term commercial paper and bonds. However, we thought that to be the case earlier when they did it for g-secs too, but look what happened there!

This change is big, and could impact yields in Corporate Bonds, which had slid down tremendously to nearly the lowest spread with government paper.

The exchanges (NSE, BSE, MCXSX) have hugely succeeded with forex derivatives, so much so that the USDINR contract is traded even more than the Nifty. The RBI has now eased limits here.

Indians can’t freely buy stuff abroad, they can’t margin trade etc. While they still can’t margin trade, the limits of how much money you can invest abroad has gone up to $250,000 per year, without end-use restrictions. The current limit was $125,000.

This makes sense and is good, because the USDINR has been appreciating, and we have no fear of everyone in India taking their money out.

There are certain restrictions anyhow – embodied in Schedule III of the FEMA rules – where even with this limit you can’t just go do certain things, like send gifts above $5,000, send donations above $5,000, College fees more than $100,000 a year etc. These are now all okay within the broader $250,000 limit.

Good move. I hate to say this but while this move is nice, it’s illogical to have had all these limits anyhow. I call for a free rupee, and have done so for the last five years, and this kind of rule would be totally unnecessary in that circumstance.

Currently all bank FDs by individuals can be broken pre-maturity, with a penalty on the interest rate paid. This is for FDs upto Rs. 1 cr.

Now RBI has allowed banks to put even sub-1cr. deposits at a higher (or different) rate, provided the FD cannot be broken (i.e. non callable).

Predictable interest rate policy. SLR cut is good, though may not be effective right now. It’s worrisome we haven’t raised FPI limits on debt (like SLR, if foreigners buy our government debt, we should be able to have our banks lend to the economy more). The liberalization of dollar investments abroad, and in futures speculation are a good thing.

What we do expect now is that rates will change downwards, either in mid-Feb or post the Budget on Feb 28. We are looking forward to the new banks (Payment and Small) and hope that banks are able to reduce their lending rates soon. Overall, the policy is excellent in that it provides solid structure but we await the specifics of certain past moves – the eTReDs situation (mid-Feb), the Payment and Small Banks, the Bharat Bill Payment System etc. Those will be more important than a policy statement itself.