The Rail Budget is here. Let’s cut through the bull and give you what’s important.

Yes, it’s time to rejoice. You’re still going to be stuffed like sardines into massive metal boxes when you’re an “unreserved” customer of the Railways, but you won’t pay a rupee more than last year.

However, you are likely to get your tickets in 5 minutes. We aren’t exactly sure why it should take five minutes either, but apparently this is a big improvement.

Freight Costs are Up

To transport goods, freight costs have been increased. The rates are between 4% and 10% (mostly 10%) and they expect traffic to grow as well. Coal transportation rates, for instance, are up 6.3%. Those people who just bid for all those coal blocks suddenly have to pay more, and we hope they factored that in.

So you complained about a train never coming on time? Well, now you can watch a movie on the Wi-Fi that the railway station will soon have. Oh, and get an SMS alert when the train is scheduled to start. (However, not when it actually arrives at your station) Why aren’t they doing a Uber/Ola-like concept where all trains will be on an India-wide, available GPS network that you can track any train on with an app? If the Railways put the GPS information in the public domain, apps can be created by anyone to track each train and then, anyone can build an app to track them. But we are not the rail minister, and we are horribly digressing.

There will also be surveillance cameras in coaches and women’s compartments without intruding on privacy. That means no cameras in the restrooms or closed bays, because there’s no privacy in any other part of a train, really.

There’s much more – lifts and escalators in stations (much required), braille-enabled coaches and more accessibility for the disabled (another much required change) and so on.

Stations too, will be auctioned for redevelopment.

Nearly 100,000 cr. will be spent on decongesting the network. 77 new projects will add more lines to existing connections. Train speeds will go up to 200 kmph from the existing 130 kmph.

Oh, this is beautiful: 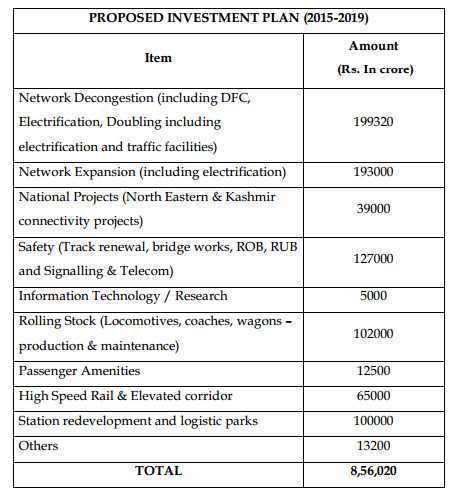 To give you perspective, that is a number that’s 60% greater than the fiscal deficit of the country, in total. The Rs. 200,000 cr. per year is massive – it comes close to the amount we spend on defence. (If you were one of the people packed like sardines in a train, it might sound like a battle every day, we know.)

Who’s Going To Fund It?

Like the bankers like to say: Your pension fund. (Note: There’s more, but that is likely to be part of the funding process)

This only helps with the current spend of Rs. 100,000 cr. this year. The rest of the funds have to be discovered next year, but they don’t want to burden the government. This sounds like a tough ask.

The problem really is that as a government entity, there is no layer of corporatization. If you buy a Railway bond, it’s as good as a government obligation. So in effect any bonds that the IRFC (the railways Finance arm) issues is the debt of the government, even though it might not show as a government bond. It may be better to work towards a solid corporate structure with government ownership, so that one can independently determine if this “bond” might actually be in trouble or if the debt burden of the Railways is too much.

It’s Good In Principle, But Sets Us Up For Disappointment

If they solved this issue of funding – and they can if the corporatize, make it transparent and do the finances well – the upgradation plan can be huge and beneficial. We do need some of these things anyhow. Elevators and Escalators, lighter and faster trains and clean toilets are basic needs of a railway system, and it’s a shame we don’t already have them.

We don’t even know why our cities (like Bangalore) don’t attempt to use the current rail network for intra-city travel, given that the railway lines are empty most of the time. There’s no real plan to do so even now, but such a plan can help, and automatically investment will flow into railway station upgrades, advertising and such.

The plan is ambitious, but we think the funding of these plans aren’t well thought through. As more clarity emerges, it might be that there is no way to secure this layer of funding, and that we might have to force the money out of banks or institutions or your pension funds. This would again be a disaster, because it doesn’t really mean “less government”, it’s a truckload of government shoved down our throats.