Ever since Narendra Modi was appointed the PM candidate by the BJP, speculation has been rife that he would come in and change India dramatically. What he has done till now might be debated, but it’s a given that his arrival, and the sweep of the BJP of the elections, has charged the stock markets. With the Nifty nearly touching 9,000, up over 37% since Jan 1, 2014, it’s almost like a Midas touch.

But what if we evaluated his first speech and found the sectors he really liked, and chose stocks in them to buy? Our analysis threw up four sectors:

We chose, in hindsight, of course, three stocks in each sector. For Power, we chose PowerGrid, NTPC and Reliance Infra.

For Tourism, Cox and Kings, Jet Airways and Indian Hotels.  (We thought about Spicejet, but would you really think a Spicejet would be a Modi stock? It is run by a direct relative of the political head of a rival party)

Finally, we chose three companies known as “friends” of Modi. Adani Enterprises, because Modi used their jets. Tata Motors, for Modi convinced them to move their plant from West Bengal to his state. And Reliance Industries, because those were the allegations going around.

We wrote all of this for an article in Outlook Magazine, in early February 2015.

The problem however is that we have used hindsight to evaluate the index. Using our data and logic we have a new Modi Index Page for you, where data is automatically updated at the end of each day. You can see the chart like this: And the Constituent Stocks: 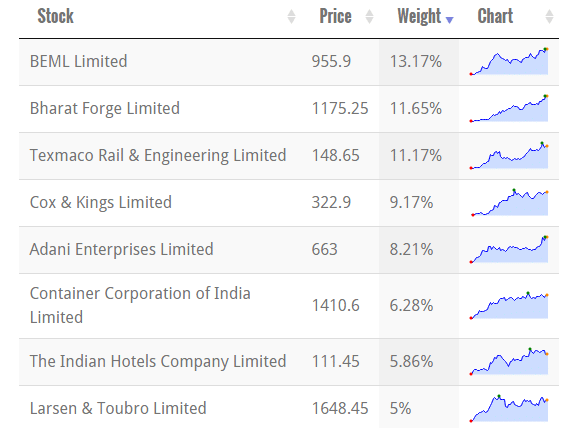 The weight will change every day because some stocks move more than others, so what started off as an equal weighted index is now biased towards the stronger stocks.

How Can You Invest In The Modi Index

You simply buy stocks in the same proportion as the index. If you have Rs. 100,000 and the weightage of Reliance Industries is 12%, then you buy Rs. 12,000 worth Reliance, and so on for the other stocks.

We do not currently have a product that you could buy in one shot that gives you the stocks in the Modi Index, but we are working on broker relationships to enable this to happen. Please connect with us at premium@capitalmind.in if you would like to be notified when we have this product.