Syriza’s point, made by Finance Minister Yanis Varoufakis, was that the existing bailout package would not be honoured as is. The package requires harsh austerity imposed on the Greece government (i.e. government cannot spend, when it was responsible for 50%+ of GDP earlier). The 240 billion euro package expires at the end of February. Syriza doesn’t request an extension – which by implication means that the terms remain the same – but a completely new package that gives the Greek government time (and money) to recover its financial health, but without the austerity measures.

Germany, the leader of the pack that gave the bailout package negotiated with the last Greek government, doesn’t want to budge even an inch. The package is not negotiable and must be honoured in full, they say. Which means austerity, and fiscal surpluses, and to maintain the Greek economy in the doldrums.

The problem is straightforward. Greece has 25% unemployed people. Largely because the government has fired them due to the austerity measures. The GDP has contracted so much that a fiscal surplus is more or less a given – we have hugely cut expenses, but it only overshadows the massive cuts in revenues (due to reduced tax collection from the lower GDP). This makes the books look good, but helps no one else. All it does is ensure Greece has enough money to pay out the interest obligations.

Greece voted in a government that said we’ll ditch austerity, rework the bailout even if it means the lenders have to take some losses (that is, some of the money they gave will not be returned at all), and get Greece back into shape. While this sounds fair for Greece, the problem is that Germany will not accept this, and neither will most of the Euro because a) they don’t have the ability to take losses given the system is so badly levered and b) other states will also request forgiveness of their debt and that will just blow things up.

Varoufakis is playing a game of what the media calls “High stakes poker”. But in reality, Greece has little to lose. It’s already in horrible shape. If it were to get in even more horrible shape now, because its banks go bust or it has to go out of the Euro and print Drachma, it will be heavy pain but for a very short period before Greece recovers. That’s kinda like Iceland, which let its banks go bust and has emerged a solid growing country after just a few years. (Meanwhile, the bailed out Greece and Ireland continue to suffer).

The Eurozone has much more to lose, not because of the volume of transactions (which is small given Greece’s size), but because of the implications. If Greece can leave the Euro and survive, other, larger countries can as well. Apart from that, the system is so heavily levered that nearly all European banks are in the position that even a tiny loss in any place can render them bankrupt, requiring bailouts everywhere.

The stakes are higher for Europe, and it’s quite likely they know it.

So supposedly there was a deal initially which gave Greece four more months. But that seems to have been changed at the last minute, supposedly by Dijsselbloem, who’s the finance representative of the Netherlands. The changes weren’t acceptable to Greece. (See the full drama as it evolved)

There is a lot of grandstanding on both sides. What’s at stake immediately is that Greece could stop receiving Emergency Liquidity Assistance from the Eurozone, which would make it default on its debt. Its banks (which own a lot of its debt) would go bankrupt. Here’s what Bloomberg tweeted about the current situation of Greek debt: 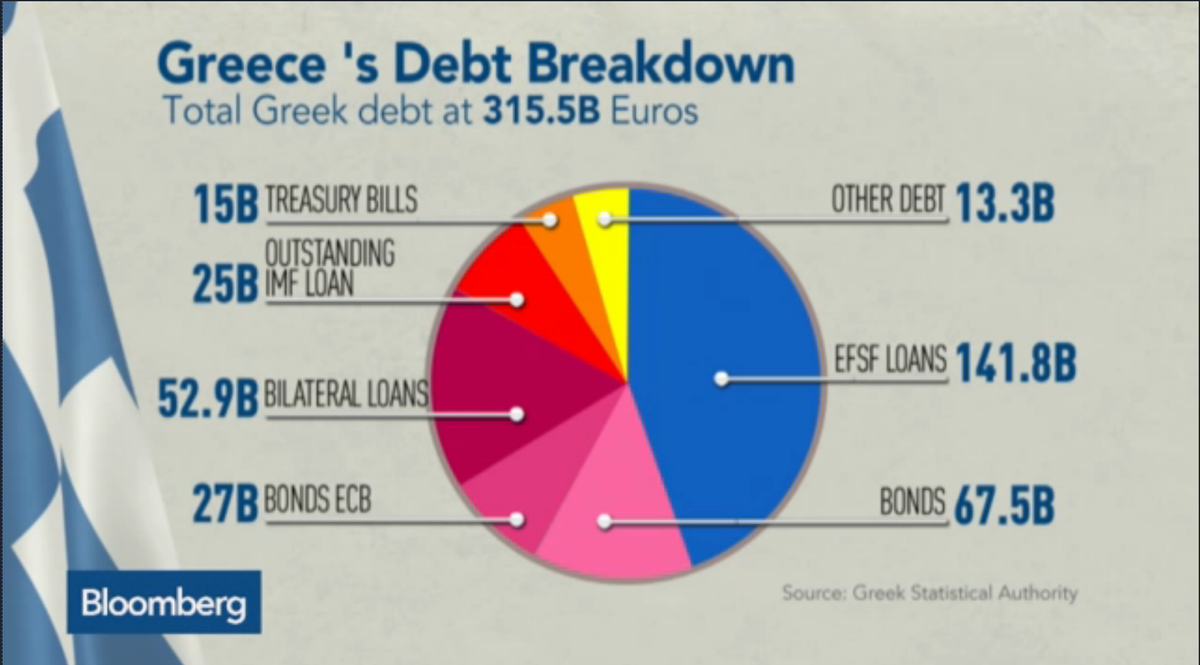 Which means while bonds and treasury bills held by banks (and investors) are about 82 billion euros, the biggest problem is their default of EFSF Loans, intercountry loans and ECB Bonds, which add up to over 200 billion euros.

That default will hurt a lot of countries who will have to refinance the ECB for such losses. In the meantime, Greece will have to go print its own currency which will get severely devalued in order for them to be competitive. They might not be allowed to export to the Eurozone because you can’t really expect someone to buy stuff from you if you just defaulted in paying them what you owe. The consequence will probably be inflows from Russia and China (who may invest in Greece in exchange for market access or such). Or, they’ll have to go back to the IMF which is quasi-European and won’t accept them easily.

How will it end?

What we are happy about is: This is the endgame. Greece is looking to force Europe’s hand, and we think Europe will wilt. Meaning, they will accept some changes in the program eventually, and let Greece reduce austerity measures. This could also mean some debt forgiveness.

If this doesn’t happen, Greece’s government will pull the plug. Their options are a) to lose face and go back with a begging bowl to the Euro countries and take money at the same terms (austerity continues) or b) to maintain face and let things blow up.

The second option is better politically, because after a default and hardship, there is going to be a big recovery in the next two years, which will help the country and the political winner will be the new government. This is the lesson we have learnt from Iceland, and we’ll learn it again, if the ECB doesn’t cave.

The next two weeks are going to be, well, interesting. Watch this space.