You gotta hand it to Manoj Nagpal (@nagpalmanoj). (He’s a great guy with excellent insights on mutual funds!) In a conversation on the impact of converting arbitrage funds to debt funds, potentially in the budget, he spoke of the strange happenings at JM Mutual Fund’s Arbitrage scheme.

JM Arb Fund was one of the big recipients of investor money, which according to Manoj came in even before the budget (which was on July 10 or so). This money amounted to Rs. 5,500 cr. (approx). The entire idea was to do bonus stripping. That is:

The remaining 100,000 units? You wait a year, and sell them. Being equity units, you get the proceeds tax free!

This can only be done only if you buy units three months before the bonus is declared. If a fund tells you they will declare a bonus three months later – illegally and secretively because you are not supposed to announce so far earlier – then you can do this, and it’s called “bonus stripping”.

Supposedly the flow to the JM arb fund was largely to this bonus stripping concept and not in relation to the budget announcement that debt funds would be taxed at short term gains if you exit before three years. (versus one year earlier).

JM announced a 40% bonus (4 for every 10 units) in November. And then there was yet another bonus of 30 or so, taking the NAV down to 10. What this means is there are unlikely to be any more bonuses. People now have approximatelyin end 8+ units “free” for every 10 units. 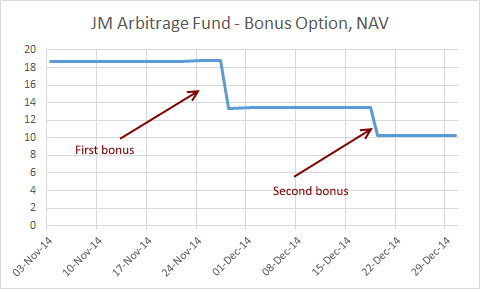 There has to be a reason we’re talking about this. The point is about whether the exit from such funds hurts the market. Let’s see:

That means investors sold about 2,600 cr. worth units.

How did JM pay for it? It had some cash reserves. But that wasn’t enough. So it would have had to unwind positions.

I’ve argued that unwinding such large positions in the market can cause the market to fall, because it involves selling the stock. (Read the post)

The “unwinding” would have happened between Nov 30 (the last time the portfolio was revealed at 5900 cr.) and Dec 18 (the date of the bonus). After the bonus date, you know that everyone will sell and book their losses, so they had to have cash available to pay out.

So technically they would have sold 2,600 cr. worth shares (and bought back derivatives) between Dec 1 and Dec 18. Let’s see how the Nifty behaved in that time: 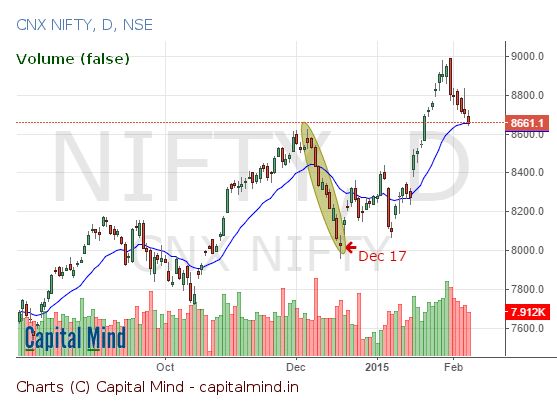 The Nifty fell from 8600 to just below 8,000 – a 7% fall – in the exact time period. In fact, the market was moving up continuously before through November, and it fell starteing December 1, and reversed on December 17 and went on to create new heights.

Is that a coincidence?

Yes it might be that exactly in the 18 days that this fund was required to sell stock, it coincided with a market fall, and then exactly on the day it finished, the market rose again. But let’s see the stocks that it sold in this time, by doing a “difference” of the portfolio at the end of the two months and then figuring out how many shares they sold. If you consider they sold at the average of the prices of the two months, here’s the top few stocks: 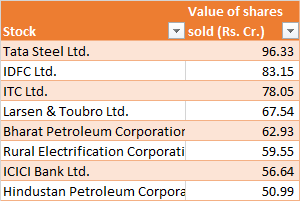 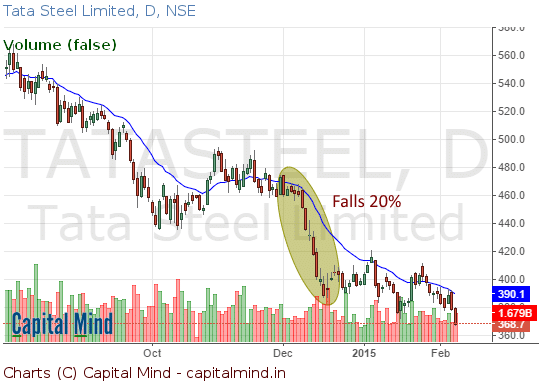 Can the stock take Rs. 8 cr. worth of selling from one fund alone? That’s 5% of it’s average daily volume!

My trading experience is that if you are 5% of the market every day for 10 days, then you are the market. If you’re selling, prices will crash. They did in Tata Steel. They did in IDFC too: 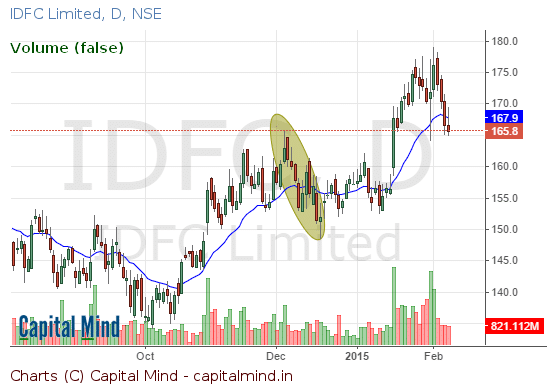 See all the other stocks (except ITC) which also behaved similarly – sharp falls in the early part of December.

Will it happen again?

Remember the bonus stripping concept? It meant sell your non-bonus units (original units) now, and hold the bonus units for a year. Holding the rest makes sense because arb funds are equity funds, where if you hold for a year, you don’t pay any capital gains taxes on the profits.

But if arb funds are now called debt funds, what happens?

You don’t get the “tax free” structure on arb funds when you hold bonus units for a year. (Taxes of at least 10% on the bonus shares apply).

That negates the tax saving nature of bonus stripping in arb funds. So people who hold these bonus units (about 3300 cr. in JM Arb fund) will sell because there is no tax advantage to holding any further.

There are 10,000 crore rupees in arb funds today. A good amount of this will leave immediately, after the announcement. 10,000 cr is a lot of money, and in some stocks this will mean more than 10% of daily stock volumes.

They don’t get a nice 18 day window like JM did as seen earlier (despite which the market tanked).

So if everyone sells at once, you’re going to see a fall in these stocks.

If the budget sees the conversion of arbitrage funds from equity to debt, you will see arb funds exit their positions and it is likely to have a rough impact on the stocks contained in these funds.