In the J&K Bank Results yesterday there was this little tiny footnote:

12. During the quarter ended December 2014, fraudulent transactions on account of discounting of fake LC’s were detected at two business units of the bank. Amount of Rs. 60.25 crores outstanding against such fake LC’s has been classified under loss category and fully provided for.

The results showed a massive increase in provisions to 220 cr. which is Rs. 60 cr. more than the last quarter (provisioned for the fraud above). Which is strange because it best the question: they haven’t seen any further NPAs in the quarter?

The fraud, according to Kashmir monitor, is in two places: A branch in Ghaziabad and Rajender Place in Delhi.

As per reports the entire Delhi zone is under scanner for purchasing fake letters of credit (LC’s) to the tune of whopping Rs 150 crores. The fraudsters as per sources initially started their activity way back in year 2011 from Ghaziabad branch through accounts titled as M/S Sanjay Electronics, Maa Durga, Amit Trading, Nitin Gupta and Pankaj Gupta.

Thereafter the fraudsters spread their operations to Rajendra Place branch and commenced their operation through M/S Electronic Points, Mayur Trading Company, Ganesh Trading Company, Ankush Gupta and Pawan Kumar Gupta. Reportedly the modus-operandi followed by the swindlers was that they would draw cash against fake Letters of Credit (L.C) of other banks without getting the same confirmed from the establishing bank.

The scale of this fraud, according to Kashmir Monitor, is Rs. 150 cr.

Overall profits are down more than 50% which is even more than the fraud amount, so fraud is not the only thing wrong with this picture. 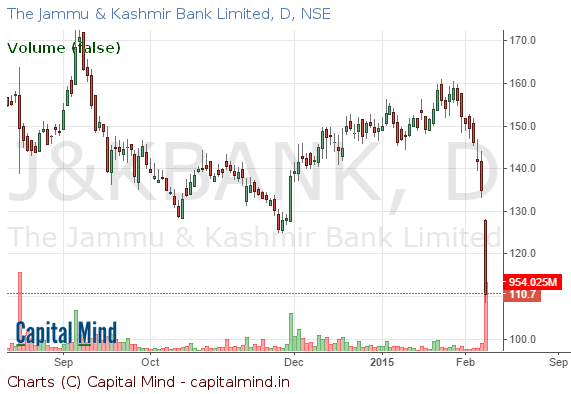