Suzlon has decided to sell that big thing it bought in the past: REPower. Now named Senvion, the German acquisition was the bane of Suzlon’s existence. After it bought REPower in 2008, it couldn’t get access to the underlying technology until it had bought out all minority shareholders, which happened only in 2012. And even then, it couldn’t use the Balance Sheet strength of the much larger German company because of German laws forbidding it.

This chapter may have finally seen an end.

Suzlon finally has sold Senvion to Centerbridge Partners, LP for a sum of 1 billion Euros or about Rs. 7500 cr.. This is way lower than the amount they spent to acquire it, which was 1.5 billion Euros. (Which, at the time, was Rs. 10,000 cr.

Centerbridge is a PE fund that buys distressed assets, it seems. While Senvion was doing well, the problem was that Suzlon wasn’t – it couldn’t service the debt it had taken to acquire Senvion apart from other bad acquisitions. Suzlon defaulted on $200 million of FCCB debt in 2012, and was on the verge of defaulting on another 13,000 cr.to Indian banks. After a tough Corporate Debt Restructuring program, the management and the promoter, Tusli Tanti, were told to please sell the darn thing.

The Modi-Factor? Return of AD

A surprise item in the budget was the reintroduction of accelerated depreciation in wind energy projects. This was strange – it first appeared only in the Hindi budget, not the English one. And then, the notification that brought it back (on Sep 16, 2014) was equally vague.  Basically an avenue to save tax, your investments in a windmill will see a 80% depreciation each year, so you can write off any profits from other sources in the early years; in exchange, your future taxes will be higher, so the net impact is to lose lesser.

While this has been a call by Suzlon in the last few years, it’s reintroduction in the budget is being spoken about as Tanti’s proximity to the new Modi government.

Does This Deal Help? 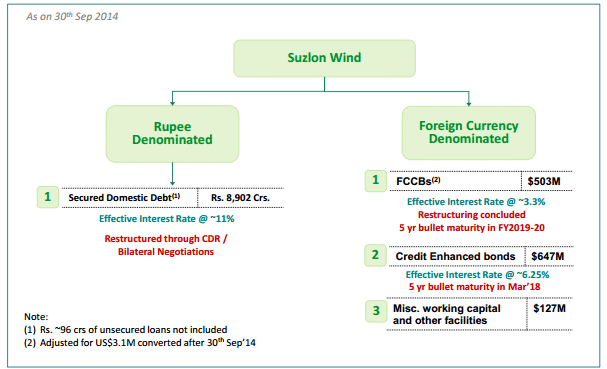 They will get ride of Rs. 7200 cr. of the Rupee denominated debt. Which leaves them with :

If you look at their revenues, Senvion was responsible for 848 million euros in H1. That’s about Rs. 6,100 cr.

Their EBIDTA (Earnings before Interest and other things), including Senvion, for H1 was just Rs. 190 cr. Double that for the full year, and you end up with Rs. 400 cr. – not enough to service even the leftover debt!

Even if they did, they will need to service at least 10% more shares (recently FCCB dilution after conversion was 10%) 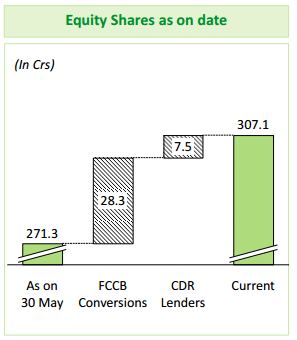 Is there hope? Can FCCBs be converted and the Debt reduced?

Let’s just say there are a lot of people in the market who think that Suzlon is darn attractive at the price of Rs. 16 because of this chart (apologies, one day old): That means now debt is lower by about 1/3rd, so interest costs will reduce. But the profit will be spread over 60% more shareholders.

So yes, it could help, marginally. But only if the stock moves considerably upward from here, and then, if profitability also improved dramatically.

We aren’t buying. Because there are cheaper, profit-making, non-FCCB-drowing, better prospects in the market.

We think that Suzlon has gone from “severely underwater” to just “underwater”. Their future growth – driven either by higher profit margins or substantially higher volumes – will determine their ability to breathe.

In an environment where oil is at $45 the global demand for wind based energy might be overshadowed by other forms. If anything, the growth has to come from India, and honestly, the volumes have to go to 3x to make this business seriously profitable.

People have done remarkable things in the past,so we aren’t writing Suzlon off. But this deal just lifts the weight off their shoulders. They will still need to recover substantially before they’re worth looking at, from an investment perspective.