There’s been a strange move in the Index of Industrial Production versus the “Eight Core Industries” in the previous month. The 8 core industries are those deemed core as they produce stuff that’s more like natural resources: Coal, Crude oil, Natural Gas, Petro-refined products, Steel, Cement, Fertilizers and Electricity.

Data is released two months late, like the IIP, but the Core Industries data comes a week earlier than the data on IIP.

Core Industries make up 37% of the weight of the IIP, so it has been useful to see the growth of the core industries to gauge how IIP will move. However, in Oct 2014 there was a severe disconnect: the core industries index grew 6.89% but the IIP for October went NEGATIVE on growth to -4.25%. 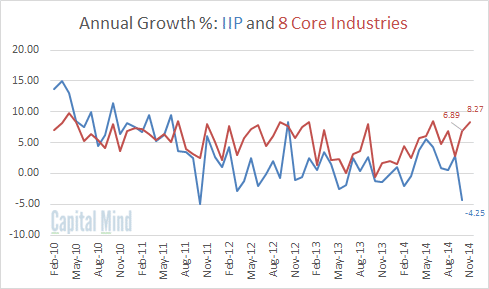 Granted, that was due to a severe degrowth in the “communication equipment” area and the one time Diwali impact (we had a very good note on it when data was released last month)

Will we see a much better IIP number?

Some of this is expected, due to the base effect (Diwali impact). But in general we should expect a positive number, not as high as 8%, but much better than the -4.25% in October. A negative surprise can take markets down, because it means that inspite of so many headwinds in our favours our production statistics have not improved.

We’ll tune in post 5:30 with an update. Positioning yourself for a large move means buying puts and calls, and they are relatively inexpensive at this point.