It’s official. Based on data released by the RBI, HDFC Bank has had the most number of customer electronic transactions in RTGS this FY 2015, as well as the highest total value of such transactions, among all the banks in India. 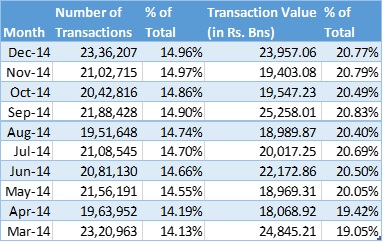 Disclaimer: The data used here in this post pertains only to RTGS transactions since data for NEFT transactions was not available for December 2014. Again, this is only for customer transactions, and excludes any inter-bank transactions.

In December, a total of 23.36 lakh customer transactions were made electronically via HDFC amounting to a total of Rs. 23.96 trillion (lakh cr.). This is a sum of both inward as well as outward transactions.

HDFC vs ICICI vs SBI

Charting the metrics for the major domestic banks, ICICI and SBI against HDFC:

While the number of customer transactions has fallen down for both ICICI and SBI, it has increased for HDFC Bank (albeit just slightly). 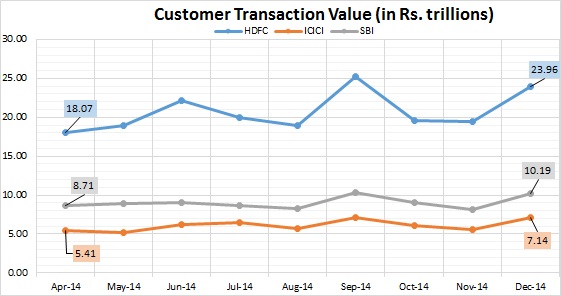 Looking at the banks in terms of Amount Transacted, we see that this is where HDFC Banks stands out.

What about NEFT? SBI leads and HDFC is Second

RTGS accounts for very large value transactions, but NEFT has more of an electronic hand to it. Here SBI leads the pack by about Rs. 2 Trillion in transaction value, and is more than twice the number of transactions. 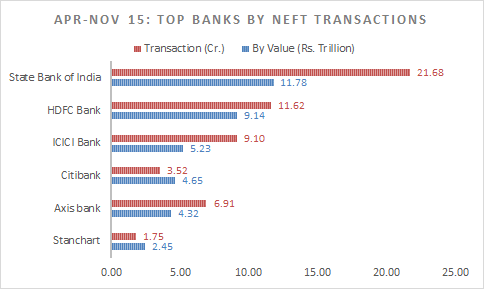 HDFC has been consistently ahead of the pack in RTGS transfers for some time now and it’s trying to catch up with SBI in NEFT as well. On December 16, HDFC announced a new idea, ‘Bank Aapki Muththi Mein’, which professes to offer more than 75 different transactions through their mobile platform as part of their GoDigital initiative.

With a large NEFT footprint, it will be interesting to see if their mobile transactions will scale into getting larger numbers or volume in NEFT. They manage a large amount of “float” which comes to them at a fairly low cost, but the mobile has not yet become the tool of choice for internet based banking, in our view (it’s still dominated by desktop/laptop).

Disclosure: Deepak Shenoy, Capital Mind’s founder, had visited the launch of this program at Varanasi, and interacted with Mr. Nitin Chugh who leads Digital Banking. We had been told of this statistic and had to verify with appropriate data.