CPI Inflation for December 2014 has come in marginally higher than the previous month’s all time low of 4.4%. At 5% it’s still considerably below RBI’s medium term target of 6%. 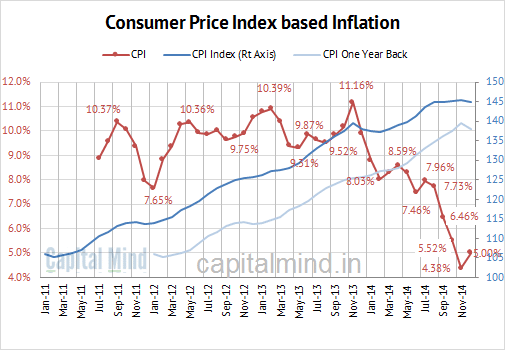 As you can see the slope of the dark blue line has dipped somewhat, giving us hope that prices might have finally come under some control. Much of this of course is related to the price of crude oil, which has continued to see new lows. 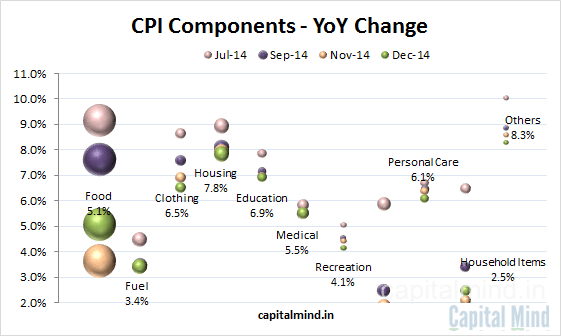 Food inflation has climbed back up to 5.1%. This is however not such a big problem as it was expected to rise marginally due to the base effect. Apart from Food and Household Items, everything else is at a near term, or all-time low. 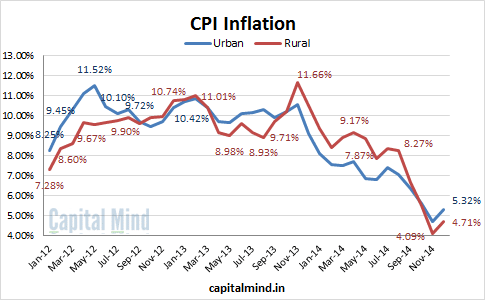 Both, however are low enough to be below the 6% target for the RBI.

Is there a rate cut coming?

While this doesn’t call for a massive rate cut just yet, the consensus is that there is a 0.25% cut coming up. At this point we at Capital Mind believe the RBI is very likely to cut rates, even before the next meeting. Note however that this is complete speculation; we have no idea what the RBI is thinking.

The rate cut, if it happens, is just symbolic. All banks and NBFCs and even corporates like Reliance Retail are able to borrow at less than 8.5% in the short term, and at subdued rates in the longer term. All a rate cut does is, right now, give an excuse to banks to cut deposit rates. Banks will not cut lending rates just yet, because banks will tell us they have too many higher cost deposits or some such silly excuse.

However, the market is likely to take it very positively if there is such a cut, because the RBI doesn’t just cut once, it will keep cutting rates as long as inflation is low.

Risks to the rate cut are:

Markets are likely to rejoice tomorrow, at least a little bit. But given that banks have run up a long time on this possibility, and given that it really does very little in terms of actually cutting lending rates, the markets might reverse quite fast, and move on to the next big risk in the system: Big NPAs and defaults, which can’t be cured by a small rate cut.