Since then, the CDR Cell has released another set of statistics; this time updated till the end of September 2014.

As of the end of September 2014, there were 638 cases referred to the CDR cell, out of which 505 cases were finally approved by them and taken to the next stage. 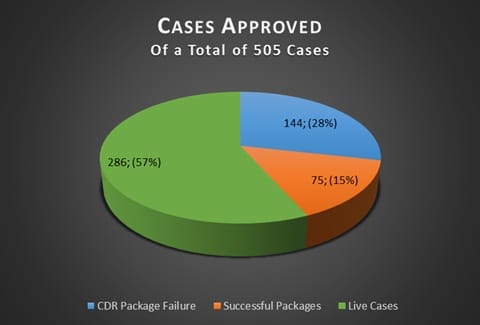 Looking at the same statistic but in terms of Aggregate Debt: 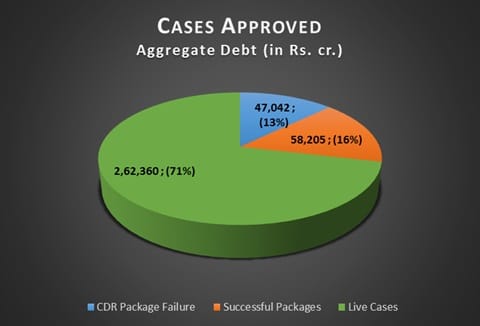 That means, a combined 87.20% of cases till date are either closed, or being currently implemented. Out of the failed packages this year, there are 4 that stand out with their numbers.

These 4 combined for 36.45% of all failed packages (aggregate debt). They all exited the CDR Cell and were sold to Asset Reconstruction Companies (ARCs) as they could not comply by the requirements of the CDR agreements.

The total debt for all the 505 cases stood at Rs. 3.68 lakh cr, up 5.48% from the end of the previous quarter. For the June quarter, total no: of approved cases was 486 amounting to an aggregate debt of Rs. 3.48 lakh cr. This means that during the September quarter itself, 19 fresh CDR cases were approved with a total debt of Rs. 19,105 cr. 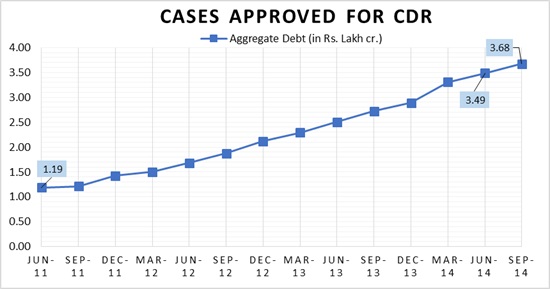 This is what the numbers tell us on a quarterly basis over the last 3 years. The aggregate debt that falls under these cases, is steadily increasing.

Charting the rate of expansion of aggregate debt under restructuring: 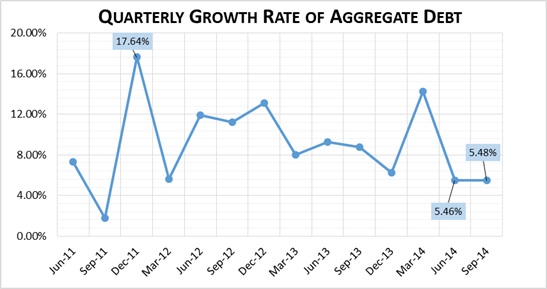 Despite Aggregate Debt under CDR definitely increasing, the rate at which this debt is increasing varies from quarter to quarter. The highest growth in aggregate debt under CDR was recorded in Q3 2012, at 17.64%. For Q1 2015 it was at 5.46%, while Q2 showed a similar growth rate at 5.48%.

Looking at quarterly change in Average Debt per Case as compared to the change in Aggregate Debt: 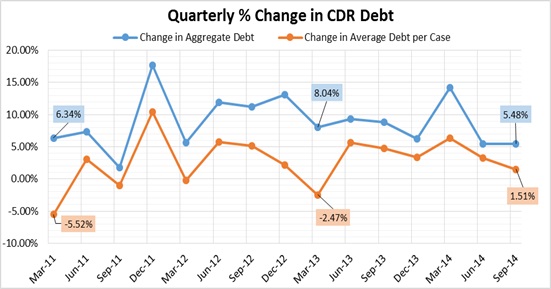 For the quarter ending September 2014, Total Aggregate Debt grew by 5.48% while Average Debt per Case grew by a tamer 1.51%.

If we classify live CDR cases based on their industry, we can see at the end of September 2014 that:

In the previous quarter the same 5 industries topped the list.

Despite varying growth rates in Aggregate Debts q-on-q, it is a worry that the absolute numbers are still going up; this despite a slew of new policies by the RBI regarding asset quality. The RBI has focused extensively on NPA ratios as well as the effectiveness of the CDR mechanism.

There are a few reasons behind the ever-increasing numbers. It can be attributed in part, to economic conditions which have not been as conducive as expected, to operations. Add to this, the inability of companies to meet certain requirements (e.g. raising additional equity) which leads to the banks with-holding funds from these companies.

We will wait for the same set of data to be released for Q3 2015 after which we will be able to analyse and see how the whole of 2014 has fared in this aspect.