And the bad news seem to keep flowing for one Dr. Vijay Mallya.

United Bank of India has now declared United Breweries Holding Ltd. (UBHL) a ‘Willful Defaulter’. UBHL is one of the guarantors of Kingfisher Airlines, the heavily debt-laden company whose flights are now grounded. Earlier in September this year, United Bank had declared Vijay Mallya too as a wilful defaulter. To quote from an article in the Economic Times:

‘”We have identified United Breweries (UB) Holdings as wilful defaulter because company had the resources to repay the loan as guarantor of Kingfisher Airlines,” United Bank of India (UBI) Executive Director Deepak Narang told PTI.’

UBHL is helmed by Vijay Mallya, who sits as the Chairman of the company. Over the last few months, there have been many events in this space, be it banks deliberating over terming Mallya or other UB entities as defaulters, or banks trying various means to make good on their near Rs. 7000 cr-loans to Kingfisher Airlines, and more. In fact, we at Capital Mind have written a couple of posts on related topics:

In fact, as per an article in the Business Standard, SBI has advised all companies, which have Vijay Mallya on their board, that the bank would be hard-pressed to lend them any more funds if he still sits on their board. This statement from SBI comes after Mallya resigned from the board of Mangalore Chemicals & Fertilizers (MCF) on the 1st of December. In another damning blow, the Indian government today refused to allow Vijay Mallya to seek re-appointment as the Managing Director of Kingfisher Airlines.

So what does this latest development mean?

Now that United Bank has gone the same way with UBHL as they did with KFA and Dr. Mallya, this would mean that any company in which UBHL (its directors rather) sits on the board, that company cannot receive fresh funds. This is the list of directors in UBHL:

This is all public information.

The companies on whose boards the above people sit are: 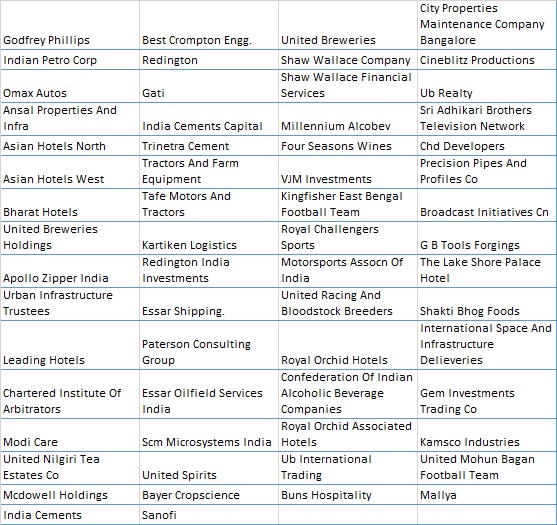 It would be interesting to see what steps these companies take in the near future.