As we come to the end of 2014, Capital Mind will do a series on different things that have happened. In today’s post we look at where Forex Reserves have gone in 2014.

After a messy 2013, when the RBI had to sell a large part of forex reserves to meet exiting investors’ needs, we saw the resurgence of the FII inflow and NRI deposits into India. In effect, RBI’s reserves have surged to nearly $320 billion and if you include forward contracts, around $330 billion. 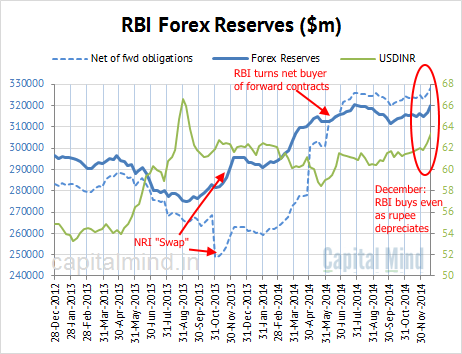 What is that NRI “Swap”?

The most celebrated of this was the Sep-Nov 2013 FCNR “Swap” for NRIs. The newly appointed Raghuram Rajan walked into a currency crisis as the rupee had fallen to Rs. 68 on the dollar (From 55 a few months back).

Rajan told the banks to get Foreign Currency deposits, and to attract that, he wanted banks to offer dollar denominated returns for three year terms (Thus: No rupee currency risk).

But banks couldn’t offer that easily. They would have to get the dollars, convert to rupees, use the money for three years, then reconvert back to dollars. To buy a three year hedge would have cost banks at least 8% a year at the time.

RBI offered such a hedge at an attractive rate – about 5% a year. Then, banks could offer loans at 3.5% in dollar terms – so, including the hedge costs, the total in rupee terms was about 8.5%, which was affordable.

The RBI took the dollars that the banks got in, adding nearly $33 billion to the forex reserves. In return, it gave the banks freshly minted rupees. The banks would return the rupees (plus 5% a year) in 2016 when the forex reserves would slip off the RBI’s books. Therefore, the money was a “forward obligation”, and that’s why there was a huge gap between RBI’s officially stated reserves to the actual “net” forward obligations.

Capital Mind relentlessly pursued this statistic in the last year; and eventually, in April and onward, the RBI started to reduce this gap by purchasing forward contracts to offset the longer term sale. So much, that this gap turned into a net forward “buy” of $10 billion (Figures only available till October 2014).

The RBI aggressively accumulated reserves on the fear of a larger exit once the US Fed cut the money printing known as Quantitative Easing. While reserves had begun to fall from July to September ($10 billion down), the Fed “exit” in October prompted the RBI to act fast.

In the last two months, the RBI has bought over $10 billion in dollars (from the above chart). And before that, between April to October, it’s bought over $60 billion, including forwards. 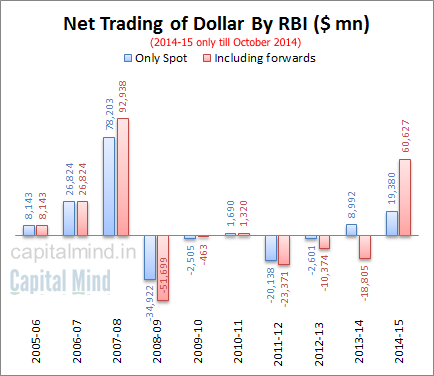 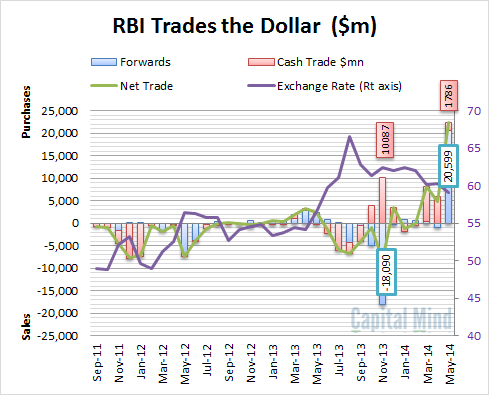 Why does the RBI buy dollars? If all that much money came in, without the RBI buying, the rupee would have appreciated strongly. And then, when the time would come for those dollars to leave, there wouldn’t be an easily available buyer; RBI steps in usually to balance such volatility.

In recent times though, its actions are peculiar, because it usually doesn’t see forex reserve increases when the rupee is falling. It’s fallen from Rs. 61.4 to Rs. 63.4 in two months, and RBI’s forex reserves are up at least $10 billion.

• RBI has been buying dollars aggressively

• Even as the rupee has been losing value

• This is strange, so something’s going on that we don’t know about

• And it’s worrying because RBI is hoarding for a potential crisis.

That tells us one thing: 2015 is going to be massively volatile for the RBI’s forex kitty and the rupee.

We’ve seen how Russia saw it’s currency fall from 30 to 80 Rubles to a dollar in three months (it’s recovered now, to 50). This was largely on the fall of crude oil, and foreign investors exiting.

The US GDP grew at an annualized 5% a year, on data released recently. When the US Fed increases rates – as it will in the second or third quarter of 2015 – it will change Indian exchange rates too. The RBI will have to fight speculators and real outflows, while the Indian economy slows. It will be a test to see if RBI is willing to let forex reserves fall substantially in its attempt to protect the rupee, or will it finally let go and make the rupee free. (As Russia has done with the Ruble now)

Stocks: We would stay away from large ECB borrowers, including the likes of Airtel and Tata Steel, which will hurt when LIBOR goes up. We don’t like IT stocks either, which seem to be hurting despite the fall in the rupee. A weakening rupee, however, helps exporters, specifically of textiles and consumer goods, and pharma. We will have a separate post on stocks.

The Great 2014 in Capital Mind Charts and Insights

• “Invisibles” Shows Why the Rupee Should Get Much Weaker

• Midcaps, Smallcaps and Auto Stocks Outperform Nifty This Year; Energy & IT Lag Behind