Surjit Bhalla has an interesting take on why the government isn’t selling ITC shares it owns through the SUUTI stake (HT @baddutt):

This is a great conspiracy theory but it’s a little difficult to believe because:

a) the bureaucracy can extract those favours anyway, since ITC depends on the government in too many way, being a tobacco giant, an FMCG and Agri company.

Basically for a business that is tiny for ITC, it wouldn’t really make sense to offer such large discounts as to be valuable. And remember the government stake in ITC is worth more than 30,000 cr. To give you a context, the total sales from all other PSUs the government wants to divest in, in FY 2015, adds up to 58,000 cr. – they could get more than half of that from just selling ITC shares. (And there’s others in there, like L&T and Axis Bank, which will add at least 20,000 cr. more)

Read: Why doesn’t the government sell Rs. 50,000 cr. of stake in private companies?

Sandip Sabharwal thinks something’s in the offing, and that there have been a large number of insider sales transactions recently, which he things means “management feels its overvalued”. The number is large (Rs. 166 cr. of insider sales in FY15) but it’s not abnormal, as there were Rs. 307 cr. such sales in FY14. Here are the top insider sales: 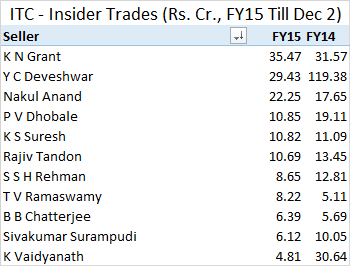 (Gleaned from transaction details provided to BSE, deduplicated and assumed close price of the day of transaction to arrive at amounts)

As we can see, only a few insiders seem to have sold disproportionately higher than last year. However such sales (which are usually after ESOP grants) could go larger by the end of the year.

Note: We’ve building the Capital Mind Data platform for our Premium users which will allow you to query this information. We’ll post an update when we have it ready!

This doesn’t really indicate abnormal sales patterns, though insiders do tend to sell a large part of their holdings. K N Grant, for instance, has sold over 10 lakh (1 million) shares, but his residual ownership is just 5.26 lakh (526K) shares. Y C Deveshwar, the CEO, sold over 800,000 shares and owns about 12 lakh (1.2 million) shares now. He sold nearly all of the 400,000 shares he got as ESOPs in November, and then some.

ITC shares shouldn’t be held by the government. It’s a private company!

It’s illogical that a new government with a majority chooses austerity (read: Less expenditure, even if it hurts) instead of selling stuff it shouldn’t be owning, despite the fact that the market is at all time highs and there will be NO problem selling those shares. And then, it’s choosing to sell stakes of PSU’s instead, such as in SAIL where it made a paltry 1700 cr.

There is no explanation for why the government isn’t FIRST selling these shares before getting all sorts of cabinet approvals to sell other shares. A simple negotiation process can easily bring that money in, and most institutions – domestic and international – will be interested in what is one of the highest market-cap stocks in India.