The Food Corporation of India (FCI) has asked the State Trading Corporation (STC) to import rice upto 10,000 tonnes per month, to meet the need for the Public Distribution System (ration shops etc., called PDS) and other schemes.

This would not be abnormal news, except: FCI already has a disgustingly large quantity of rice with it!

Look carefully at the total rice and wheat stocks with FCI, and the black line (which is the “buffer requirement” that is needed. (As of October 1, source: FinMin) 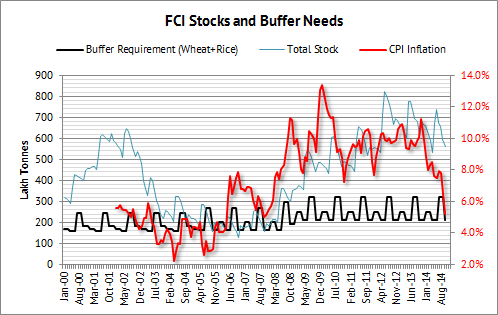 What do we need as a buffer for rice? Just 82 lakh tonnes as of October 1! See the rice stocks move: 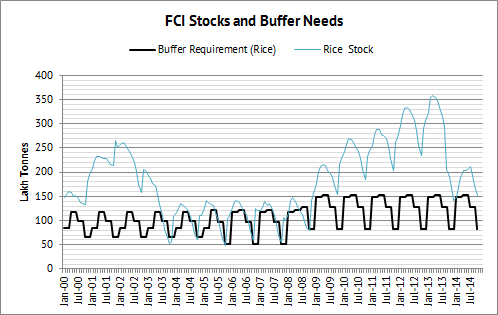 We are essentially at double the requirement in terms of plain rice, and then we have another 32 lakh tonnes of unmilled paddy.

There is something seriously wrong here. It turns out there is a report of “phantom” stocks in FCI of over 10,000 cr. worth of rice. Paddy sent to millers hasn’t been returned yet. The food ministry is concerned.

Is this a scam of enormous proportions? Already FCI is in the limelight for paying some loaders over Rs. 4 lakh per month (equivalent salaries at private companies is less than 1/10th). But stealing rice would be an even bigger scam – and it might just be time to scrap or break up the behemoth and opaque FCI.

Note: the FCI web site has been non functional for a month.