This year seems to have really kicked off for Mutual Funds. Especially Equity Mutual Funds, which have recorded a Rs. 86,816 cr. worth of inflows for the current Financial Year till November end. This includes inflows into already existing Mutual Funds, as well as new entrants.

All the data used here was taken from AMFI’s website.

In the 8 months of FY15 till the end of November, the amount of inflows into Equity Mutual Funds are at an all-time high. For the same period in previous years, the inflows pale in comparison to this year’s collection. In fact, till now, Inflows (Gross) have been greater than the last five full years! Before this year, FY 2008 was the best year for Equity Mutual Funds, with a near Rs. 1.2 lakh crores in inflows for the whole year. On a comparison, even for that year, until November the inflows were Rs. 68,752 cr. Since FY 2008 onwards, inflows were on the down.

Lowest Inflows Since May, Though

However, for the month of November this year, Net Inflows into Equity MFs (gross inflows less redemptions) was lower than in September and October. 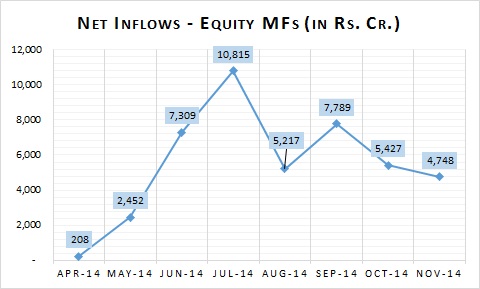 In fact, Net Inflows into Equity MFs had touched a near 7-year high in July this year with Rs. 10,815 cr. The last time it scaled such heights was in January 2008, where Net Inflows was Rs, 12,717 cr. As we can see, Net Inflows have been consistently positive the whole of FY15, but it has been reducing over the last few months. 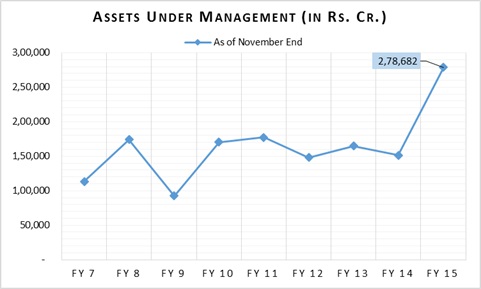 Assets Under Management for Equity Mutual Funds at the end of November, are at Rs. 2.79 lakh crores, which again is the highest at the same point in the year, in over 8 years.

It definitely does look like investors are pumping more money into Equity MFs this year. With AUMs touching new highs, and a positive trend in Net Inflows this year, it could mark the return of retail investors into the market.