Many fund houses have come up with “closed ended funds” which have been the rage with distributors lately, largely (almost entirely) because of the much higher commission structure. Should you buy into the madness?

If it’s the rage with distributors because of commissions, the answer should be a BIG NO.

Let’s see why. Firstly, what the heck are closed ended funds?

Here’s a video we did a long time back: 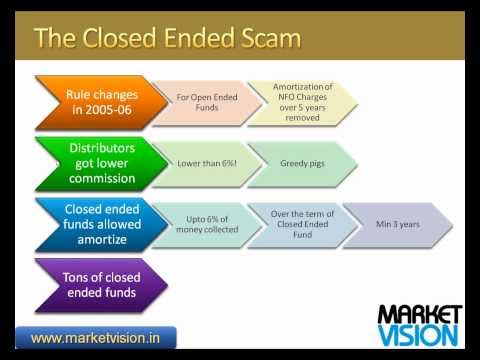 (Ignore the points about capital gains after one year, now it’s three years for debt funds. )

Because they get more commissions. Remember that mutual funds pay commissions to distributors and adjust it as part of their management fee, which can be a max of 2.5% of total assets.

Typically this meant about 1% “entry time” commissions, and then 0.5% a year of trailing commissions.

If you know a customer can’t exit for three years, then you can pay the distributor 6% upfront and no trailing fees, and recover that amount over the next three years. You’ll net make just 1.5% but that’s better than not making anything at all.

So the distributor, who loves the concept of a 6% commission, will go at you hammer and tongs to buy this fund.

The incentives are all screwed up. (for you as an investor)

The distributor gets 6% upfront – he has no reason to get you into a good fund and nothing to answer for if the fund does badly. You can’t get out, and he’ll just tell you to wait till exit at which point he’ll say how could I have known, etc.

A mutual fund has no incentive to perform if you are locked in, because you can’t get out easily. In fact they can’t even attract more people (since you can’t buy into the fund after the NFO) so there’s no point really.

Having said that, fund managers do want to attract people to subsequently issued funds, so you might see one positive incentive there. Even if you are locked in, you might find they want to perform well. (More on this later)

Plus, they have already paid 6% from their pocket (remember, they are yet to charge you). They just have you as a customer, and probably aren’t earning too much (if they pay out 6% out of a 7.5% three year potential payout, they are earning very little). No earning = no incentive; remember, in this example, your distributor has earned 4x what the fund manager has, and the fund manager has to do all the work!

Finally, remember that the distribution costs will ensure that the fund always charges the maximum possible fees. Yes the fees are capped at 2.5% today but managers could charge lower fees, if they wanted. A high distribution cost, though, ensures that will not happen.

I honestly don’t think so. Such funds are designed to protect you from yourself. So that you don’t redeem early. And largely to give more commissions.

But there could be a reason to like another kind of fund that’s locked in: Tax Saving Funds.

Tax saving funds are also locked in for three years, and many offer ludicrously high commissions as well.

However, these funds are open ended – you can get in any time you like.

The performance, in recent years, has been interesting. For instance, Reliance’s Tax Saver Fund has given a 39% annualized return over three years, while the best Reliance mid/large cap fund is the Reliance Top 200, which is a 30% return. Many of the others have matched or beaten their large cap equity peers (from the same fund house)

If you can’t trust yourself to not yank off your money, the tax saving funds may be a better bet?

And you should avoid commissions by investing in the “DIRECT” Option. But this means not trading through your bank or a distributor (even from online sites).

(However, if you were the kind who would invest direct, you probably will never invest in such funds in the first place. )

What If I have already invested?

You can do nothing. Sit tight and wait till the fund runs its course.