We have made this post of Capital Mind Premium free for all visitors. Feel free to register for a trial and subscribe!

India imports a lot of goods, but we tend to make it up with two things: Service exports and inward remittances. (We don’t make all of it up, but yes, that’s a good chunk)

These make up most of the “invisibles” in India’s trade. Invisible, as in not visible in ports and trading points, because it’s all virtual. Such as software – they can’t track when you export software, but you get paid for it. (Versus if you buy an iPhone, it appears at a port somewhere)

We take the total receipts minus the total payments, to reach a “Net Invisibles” number – which shows a startling change. 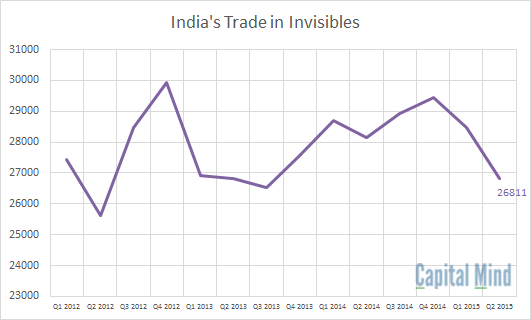 The growth in the invisibles number, year on year, is also anaemic: India’s remittances and software exports make much of the invisible number each quarter: 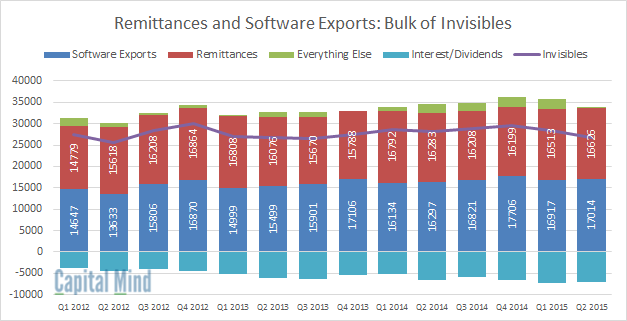 The reason “Interest/Dividends” is negative, is that we pay out interest on ECB/FCCBs and dividends to foreign investors.

See the lack of anything “green” this time? That means the “Everything Else” part which was a positive number is now not acting in our favour at all.

Why does this matter?

Essentially, our currency weakened a lot since last year but we still saw net imports grow and net exports reduce. The rupee has been weakening for most of Q2 and then on. 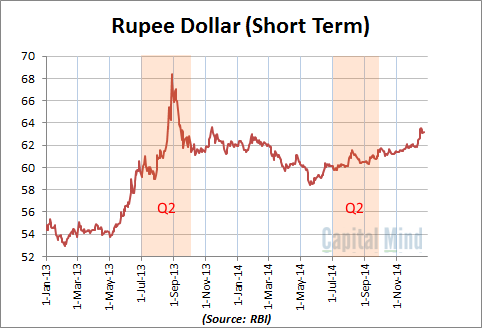 That doesn’t augur well – we should technically have been exporting more and importing less, because of a weaker rupee. Apparently, that’s not the case. Software exports grew just 4.6% and remittances, 2.1%.

This means the rupee has to weaken a lot more for things to really improve. Already, we are at 63.26, and the rupee could go a little while further.