In continuation of Capital Mind’s year-end specials (read more at: 2014 Ends With the Death of Deposit Growth, Lowest in 20 years!), we decide to look at yet another one of 2014’s enigmas. Oil. This post aims to decipher the somewhat odd relationship that crude oil prices and Indian petrol and diesel prices have had over the years. 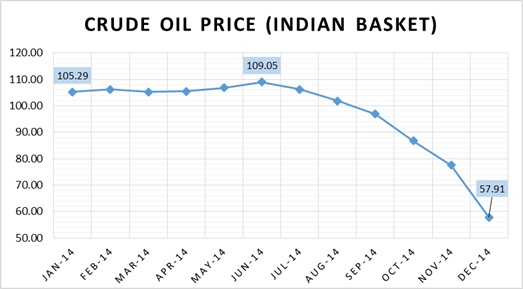 The data used above was obtained from Petroleum Planning and Analysis Cell (PPAC) website. The organisation publishes data for current as well as historical prices of crude oil. Since we are not through December yet, at the time of writing this post Indian Basket prices were available only till November 2014, through an official press release, we obtained the data for Indian Basket price as of 24th December 2014.

The Indian Basket price of crude oil began the year 2014 at $105.9 to the barrel. Since then, it had risen slowly to reach a yearly high of $ 109.05 in the month of June. Since then however, as global crude oil prices started to plummet, we can see that the Indian Basket price fell sharply to reach $ 57.91 per barrel as of 24th December 2014. That corresponds to a massive 46.9% reduction in prices!

Now the next logical step would be to determine: Have local petrol and diesel prices charted the same trajectory as crude oil prices? Let’s look at data over the last few years. 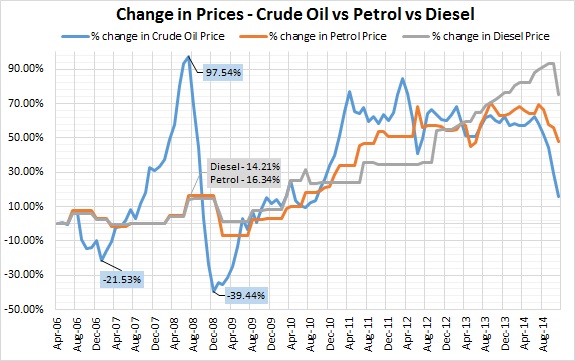 The chart above maps the changes in Crude Oil Prices, Petrol Prices and Diesel Prices for the last 8 years, beginning April 2006 (FY 2017). We use the prices of Crude Oil and Fuels as of April 2002 as the base price, and chart the monthly movement of prices from that base value. All the data for fuel prices was obtained from PPAC’s website which includes current as well as historical information on prices.

One point to note in this exercise, is that the excise duties on petrol and diesel had also been hiked this year. This could be due to an attempt to make up for the reduced taxes that would ensue from the dramatic oil price falls. Having said that, 2014 truly was a year to note for OnG companies and the Indian government. For long now, a substantial portion of our fiscal deficit has been directly or indirectly based on global oil prices, considering the huge imports of oil to sustain our fuel needs. With the major oil-producing nations not showing a keenness in reducing their supplies to shore up prices, one can expect movements in the oil prices to spill over to 2015 as well. One thing is for sure though; the Indian consumers, taxpayers and governments have seen some benefits in 2014 from this essential commodity.