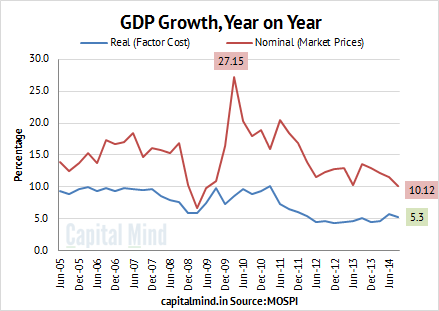 Nominal Growth is what you can measure. Real growth, on the other hand, is statistically calculated by reducing the impact of inflation on the numbers.

What we really should care about, in GDP, is what it’s telling us. The absolute numbers mean nothing; it’s all about understanding growth and concentration.  Our analysis tells us three things the GDP numbers tell us that is hidden inside the data.

Is Low Nominal Growth Good? Only if you believe Inflation numbers

On its own, this is good. Slowing inflation means that things on the inflation front are getting better. In fact this is the lowest “GDP Deflator” since 2009. 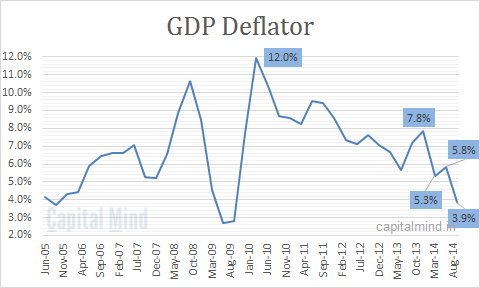 The GDP Deflator is calculated by statistically adjusting “real” GDP to “nominal” GDP, and calculating how much, in this quarter, has GDP been impacted by inflation.

Also read: Unravelling the GDP Numbers and How They are Calculated.

If you assume a higher rate of inflation of, say, 6%, then a nominal growth number of 10% will translate to a growth of about 4% in GDP. Now that is scary. (You have to take nominal as the reference as that is what is measured; the “real” number is calculated.

Two: Exports Decline and the Government Saves The Day

If you look at the components of GDP, you find that the biggest element – Private Consumption is down. What happened then to the euphoria of a new and stable government? 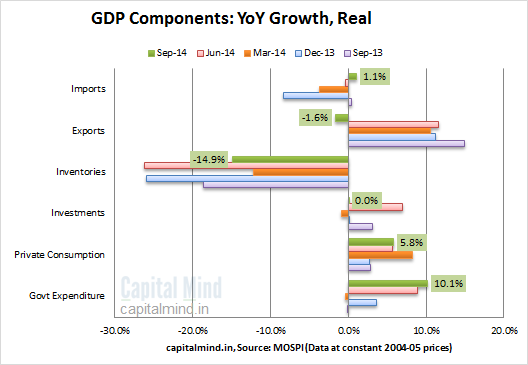 Private consumption is at a low number of 5.8% (real terms) but the mindblowing thing is that exports have contracted!

After four quarters of positive export growth we saw a decline in exports in real terms. The last time we saw this? Jun 2013, when exports dropped 2.8%. What happened then? Subsequently, in July/August 2013, we saw the USDINR exchange rate go from 55 to 68.  The fear is now real – we are actually exporting less.

Imports on the other hand, have increased.

In general, if we need the rupee to devalue in order to be competitive, then this will happen in the next few quarters. While the fall in crude prices (mostly after September) has masked our problem, eventually as crude settles, the lack of exports will require structural answers.

But notice this: The government went into “austerity mode” in November 2014. That will mean in the next GDP note, we won’t have the government to support us. How will we make up?

Three: Where Did Manufacturing Go?

Yes, we should make in India. Because, apparently, we’re not even bloody trying. 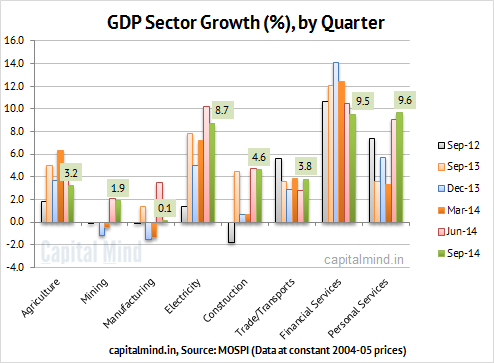 Look carefully at the 0.1% number. This is a year on year growth number for the September quarter.

We are in deeply dangerous territory on manufacturing; after a great June, nothing’s moving! And then,

Overall, in terms of contributions to the GDP growth number, it’s services that do the trick – financial and personal, which made for 3.4% of the total growth of 5.4%. The rest weren’t significant. 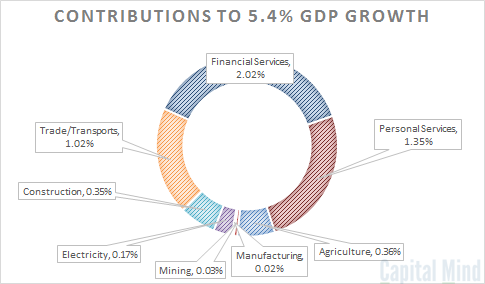 Our Assessment: Not Looking Good, But Markets Won’t Care

Maybe the best quarter is ahead of us. Because this one wasn’t impressive.

Last quarter , we said that the 5.7% we saw was unlikely to be repeated.

The only reason GDP growth looks good is that inflation is coming down. There are a few things that remain a fear:

Markets on the other hand, are unlikely to give a damn. At this point in the joyride of stocks, the play is to just buy anything, because the foreign investors are piling on. So we don’t expect stocks to fall, and bonds will remain strong(which are at 8.1% on the 10 year, the lowest in 15 months). However, this is fodder for those who need to understand the game is no longer fundamentals – which as we see are weak – but all about money flow.

Macro-economic data will work its magic over time. At this point, the excitement in the stock market does not reflect what the GDP is telling us: that beneath the surface, things are not as good as they seem.

At Capital Mind, we don’t just give you stories; we give you data to back it up as well, and solid charts. Do let us know what else you’d like to see, and what you think!