We’re a little more than midway into the Financial Year 2014-2015: perfect time for a comparative analysis of the performance of the new government. How bad is the situation, really?

One of the NDA’s primary targets as far as the Finance Ministry goes, was to reduce the fiscal deficit to within 4.1% of the GDP. GDP growth rates had been stagnating at sub-5% levels for the last 2 years. However, the recent euphoria seen in the markets, coupled with expectations by investors and analysts alike of an increased pace in investments and transparency in governance, prepped up the economy and the GDP grew at 5.8% in Q1 this year. The growth rate is expected to continue at around this rate for FY 2015.

On October 30th, almost out of the blue, the government announced a host of austerity measures with a view to achieve the goal of bringing down the fiscal deficit to 4.1% of the country’s GDP. The measures include:

Why these measures now? One would assume that the lower crude price would cut the fiscal deficit (the fuel subsidy bill is lower). And, the “recovering” economy should mean more taxes. Add to this the return of disinvestment, the coal mine auctions and spectrum auctions, we should see robust non-tax revenue as well.

Why these measures now? The answer lies in a piece of data released by the CGA (Controller General of Accounts) which, at the end of every month, tells us where the government stands with respect to it’s budgeted revenue and expenditure.

For FY 15, the newly ushered-in NDA government, had set itself what some analysts see as a highly optimistic and seemingly difficult goal of reining in the fiscal deficit to 4.1% of the GDP.

Our fiscal deficit (expenditures less revenues) at the end of Q2 2015 is at Rs. 4.39 lakh crores, already at 82.61 % of the budgeted amount of Rs. 5.31 lakh cr. Let’s look at how the actual fiscal deficit as a percentage of budgeted deficit has been over the last few years.

The Financial Year runs from April to March. We look closer at the 2 components of deficit, expenditures and revenues, in some more detail to see where this sudden spike in Deficit has come from.

Expenditures. This is the area that these new austerity measures are hoping to eat away at. By curbing un-necessary expenses for government officials, de-regulating diesel (meaning the govt. wouldn’t have to pay subsidies on diesel) and many such more, the government hopes to bring down the fiscal deficit. Looking at the chart, we can see that over the past 5 years, the actual total expenditures as of end of Q2 has remained more or less the same. In FY 2010, almost 44% of the budgeted expenditures was exhausted by the end of Q2, while in this year, at the end of Q2 it is at 48.03%.

Note that austerity measures have been in place from last year already. Fuel subsidies are typically only paid in the last quarter. The bulk of the expenditure being done till now would be fairly well planned and known in advance; there’s hardly any spike to take care of. The austerity measures are a way for the government to say: this is not business as usual.

Who hurts in this process? At this point, it has to be airlines and five star hotels who hurt directly. But austerity also means the government won’t embark on new things, they won’t attempt to help build more roads or increase costs where they are required as well. 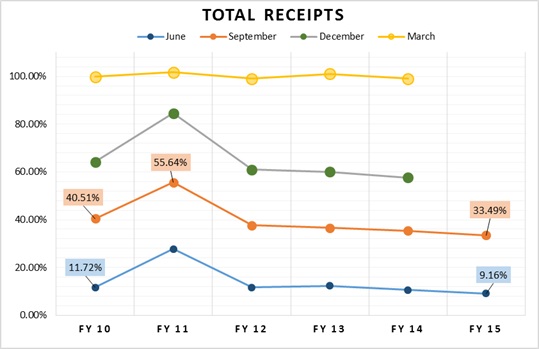 This is the lowest revenue-to-budget figure in five years as of September.

Going into revenue a little deeper, let’s look at the biggest element = Taxes. If we analyze growth of indirect and direct taxes, we can see where the scary elements come in. 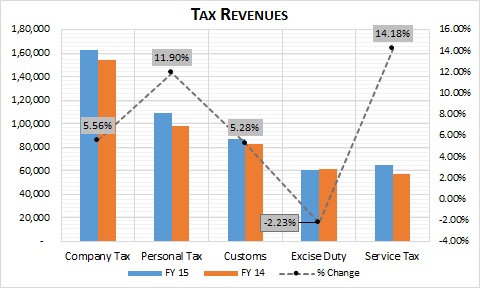 Watch carefully: Personal taxes (that individuals pay) and service taxes (which we all pay for services) went up. But comparatively, customs duty collections grew at a low pace. Much of this is because the rupee depreciation would have reduced import growth, and we restricted gold imports.

Corporation taxes have an anemic single digit growth from last year. This is worrisome because a good economy should mean companies are making much more money – at least, more than people are individually. Apparently not.

Scariest is the Excise Duty piece, where duties collected saw negative growth! Excise is paid on stuff that is “made in India”. If we’re not paying as much excise duty as last year, are we manufacturing lesser things than last year? For an economy with a 12% nominal growth it’s very scary to see excise duties fall year on year. (In certain cases, excise duty levies have been cut, like in cars. But they are not significant enough to cause a fall in overall excise collections.)

Austerity measures have long been the go-to solution for governments looking for a quick-fix. However, the scary part is that excise duty and company taxes are not growing at any reasonable pace. If this doesn’t change by December, this can become an emergency.

(Austerity, by itself, will cause revenues to fall – because when the government buys things, it pays a private party which then pays taxes and so on)

Let’s not forget, similar austerity measures were announced by the UPA as well. And Expenditures have not been changing too much year-on-year. A more apt and effective way to address the fiscal concerns would be to increase the revenues. And the government seems to be doing this, with the unlikely help of global economics. There are a few encouraging signs for the policy-makers regarding their fiscal targets:

Expectations of additional revenues and decreased expenditures could ensure that the audacious target of a 4.1% deficit, could indeed become a reality. But indeed, for this to happen, we will need a recovery in manufacturing (higher excise duties) and corporate profits (higher direct tax revenues) – both of which, as of September, are waving flags of caution.