RBI returns to buying dollars as they reveal in their November bulletin, with a purchase of $1.4 billion in September. This time, they added about $3 billion in forwards as well. 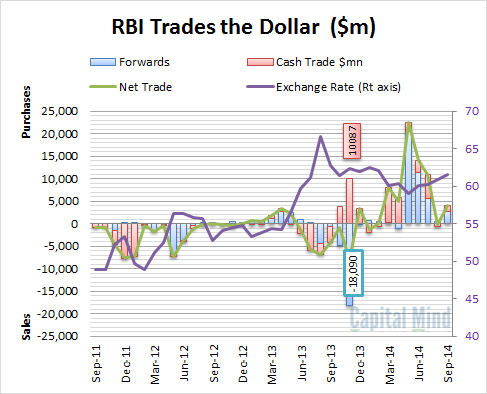 Including forwards, the total RBI purchase of dollars is the highest in 2014 since 2007-08 at over $56 billion, and the second highest in the last decade. 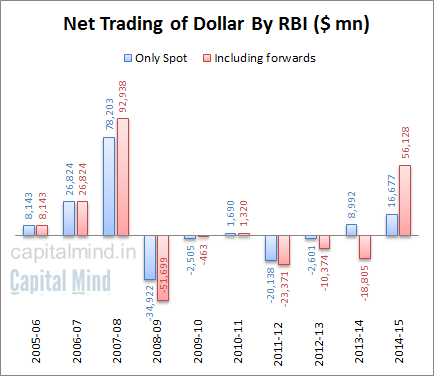 More recent data on currency reserves (which increase when the RBI buys dollars) show cash reserves at $316 billion, ($324 bn including forwards). This has now reversed trend since September. 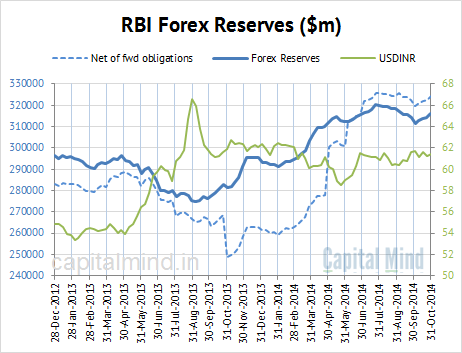 Impact: The RBI is buying reserves and in the process, keeping the exchange rate constant even as dollars flow in from foreign investors. It’s interesting that the RBI is net buying dollars from the market, even as the rupee is falling! This means there’s an impetus to reduce the impact of the US retreat from QE (which could take money out of India and thus increase the demand for dollars).

If this isn’t appropriately sterlized, such printing of rupees to buy dollars will introduce inflation. The printing in 2007 showed very high inflation in 2009-10 (such things have a two year lag). Will our printing today make life difficult in 2016? Let’s see what the data shows a few months from now.