Along with this announcement, the Central Bank also said that they are raising the interest rates in the country, to 13% from 12%. The government is fighting high inflation on one end, and plummeting crude oil prices on the other.

Let’s see how the Naira has fared over the last few months: 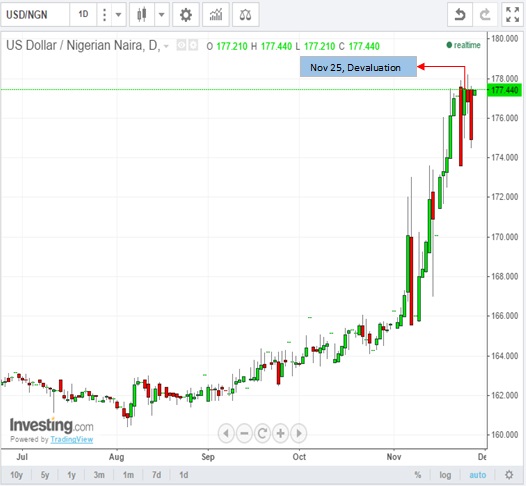 Since August 28, in 3 months, the currency has fallen about 9.5% vs the Dollar. This comes on the back of global crude prices falling sharply. Brent Crude oil ended November 27 at $77.75, roughly 30% in the same 3 month period. Nigeria is Africa’s largest oil-producing nation and a key member of the OPEC. More than 70% of the Nigerian government’s revenues comes from its oil resources.

Once the announcement of devaluation was made, Bajaj Auto shares felt the impact. 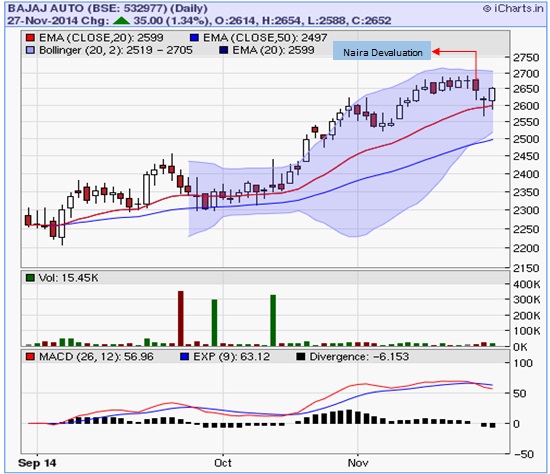 Bajaj Auto’s shares dropped 8% once the announcement was made.

This data was obtained from the company’s FY 14 Annual Report.

Due to the devaluation, costs for Bajaj Auto are set to go up as well. The company seems unfazed by this situation though. As per an article in NDTV Profit, Bajaj Auto plans to deal with this conundrum by sharing increased costs among themselves, the distributors and the consumers. That is, Bajaj Auto is set to hike their prices as well. But this would apply only to their operations in Nigeria. It will be interesting to see how Bajaj Auto deals with this potential banana skin, and how it will affect their revenues.