Kotak Bank will buy ING Vysya bank in an all stock transaction that gives ING Vysya shareholders 725 shares of Kotak Bank if they own 1000 shares of ING Vysya.

This will create a larger bank in assets; the new Kotak bank will be about 50% larger. However, the price increase in Kotak’s shares (to Rs. 1200) might have fully factored in the growth increase, without allowing for any issues in the merger going forward.

Here’s snippets from their presentation that puts things in perspective. 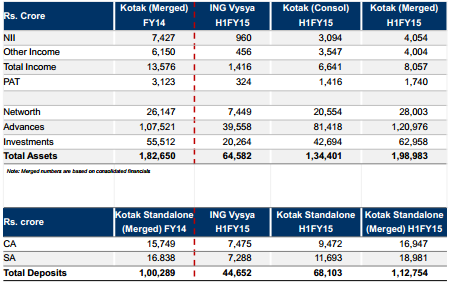 The combined CASA of both the entities is still 31%. 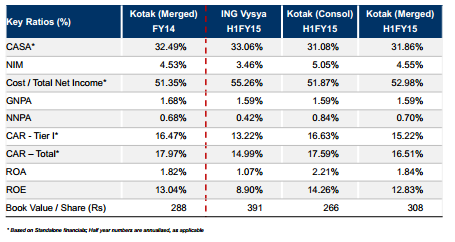 Kotak already has a good base in Delhi and Mumbai, and in general, the West and North of India. This merger gives them access to the south. However, the concentration in Chennai is low, in comparison, and Kolkata isn’t much either.

Of the combined entity, Kotak promoters retain 34%, while FIIs own 33% (plus another 6.8% in FDI). The ING Groep which is Vysya’s promoter, gets 6.5%. Domestic investors will hold a combined 19%, which makes them smaller than any other party.

However the branch geographies are metro centric, it seems, though the merged bank gets a bigger presence in the south. From data in Jun 2014, here’s the ATM distribution:

This merger won’t majorly change the company’s financials in the near term. Today’s move might have a smart one, on the back of solid global liquidity, but we at Capital Mind believe this move may not last too long, and that much of it hinges on a definite cut in RBI’s rupee rate, which as we’ve talked about in Capital Mind Premium, isn’t quite looking that definite.

Another point to note is that RBI will definitely have to introduce new banks. We don’t have that many private banks (just 19, will now fall to 18) and the government isn’t exactly trying to sell their stake fast in public sector banks. In order to grow, we need a banking system that is better, not just plump and fat. (31% CASA Ratios! Come on, now, this is a hugely inefficient banking system, that benefits from lack of competition, that’s all) If the RBI fast tracks the creation of new banks, it won’t look great to give current banks a P/E of 27.