The US Fed finally ended their quantitative easing (QE) program yesterday. The program consisted of the federal reserve printing money to buy a truckload of US Government Bonds and Mortgage Based Securities. This was intended so that the money that was put in the hands of banks who sold these products to the Fed, would have enough to then lend the money out to the economy.

This program started with $85bn a month of purchases, divided into $45 billion in government bonds and $40 billion in MBS. Additionally, any interest earned or principal repayments (on the MBS) have been reinvested. The QE has been “tapered” down from 2013, going down $10 billion at a time, to reach $15 billion a few months back. Now, it’s been taken off completely.

The impact should have been heavily negative – according to the text books. They’re not printing more money! This should be a disaster!

But it’s not. There are many reasons why not, but the fundamental concept is this: they are stopping QE because the US economy is recovering big time. It’s seeing very low unemployment and growth is picking up on the credit front. (Which is what they really wanted to achieve).

However, inflation according to the Fed remains low. So they will keep interest rates low for a considerable period of time. (Which is: at least for two months before they have enough reason to change their mind). The fact that rates aren’t going up prompts rates to not be negatively impacted worldwide. Indian bond yields actually went down to below 8.3% right towards the end. (Ended at 8.28%)

This is the lowest the Indian 10 year bond has been for about a year. But we did see, temporarily, yields as low as 7.1% on the 10 year in May 2013; but that was before the big devaluation and the rise in inflation which prompted a rate hike.

US Yields Have Actually Fallen Since the Taper

Contrary to popular expectations, the US 10 year yield has actually fallen since the actual taper. And in fact, the yield went UP after the start of QE3 (which started in Sep 2012 with $40 billion, and went to $85 bn in Dec 2012). Since Dec 2013, the Fed has reduced purchases by $10 billion per month or so. 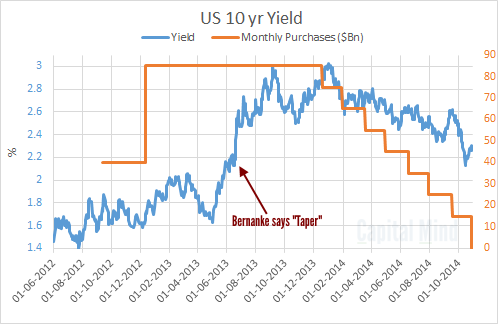 It was Bernanke’s Jun 2013 statements that took yields up (but they were already going up from a bit earlier). The point is: people knew there would be a taper. The fear of it caused yields to rise (and an emerging market crisis that hurt India too). But when the taper actually happened, people realized this was a non-event, and yields fell.

For a lot of complicated reasons, this is a non-event now also. You may ask: What the heck, $85 billion a month to zero and then nothing? There are good answers, and the simple and quick answer was: the extra money never actually came into the US economy, so it’s absence will not be felt. We’re going to have a much more detailed version of this for Capital Mind Premium subscribers that explains with more data.

India will not see outflows of foreign exchange because of the taper or the lack of QE. But it has other reasons to: a slowing credit environment, the overhang of the coal scam and a gazillion NPAs. True, our fiscal situation is okay, and the crude drop will see a lower current account deficit too. But the impact is small compared to the impact of a gargantuan banking system under the kind of stress we haven’t seen in more than 10 years.  If foreigners choose to exit, it will not be because of the Fed, it’ll be because India’s losing its grip on itself.

However, the QE piece must be seen in context; it means the US economy is doing well. They have no indications they will raise rates, but if they do, it will be interesting to see if Indian bonds lose enthu, or just the yield difference between the two countries contracts. (Which almost necessarily means that the forward premium for the USDINR will also contract). Till then, I don’t see this as a big thing for the Indian markets.