RBI’s selling bonds, and selling them big time. With India moving to what seems to be a liquidity glut in the banking system, with the RBI now having to lend out lesser and lesser every day: 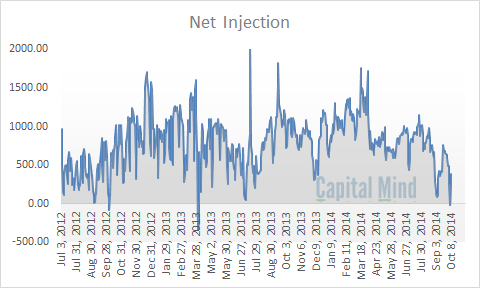 The net injection is the sum of

We saw a brief up move because of the September 15 tax filing (when people pay taxes, the money goes into the government account into RBI and thus out of circulation, and thus banks borrow from the RBI)

This net injection, however is temporary liquidity since banks only borrow or lend for a short term. If they are moving to net park money in the RBI, they have too much money available. One way to remove that from the system is for the RBI to sell bonds. (It could sell dollars too but at this time, selling dollars would be disastrous as the rupee nears Rs. 62 to the dollar)

We have already see 125 bn (Rs. 12,500 cr.) being sold this year (there are nearly no purchases), where RBI has sold directly to the market.

Now the RBI also intends to cut liquidity even more:

Both these measures will reduce liquidity – cash will move from banks to the RBI in exchange for bonds. The former (the OMO sale) is permanent liquidity as the money doesn’t have to be returned The latter is temporary.

Is there an impact?

If there is excess liquidity it could come because the RBI is buying dollars (and printing rupees to buy them). There is no such buying at the moment.

The other, and more scary reason, is that banks aren’t willing to lend to the economy, or looking to find much safer borrowers. This is scary because what could be driving them to this situation could be high defaults, much of which we don’t know anything about.

If it’s the second reason we might be in a spot of trouble.

However it does mean that rates are down in the system; the safest avenues are seeing lower and lower yields.

With market rates coming down, we might see RBI rates fall in the next meeting, if inflation behaves. As the crude price goes below $90 it might be that inflation starts coming down overall; and if CPI is within a meaningful range, RBI will cut rates in the December meeting.