The Nifty continues to “correct”, although it did rise marginally today.  The recent Nifty “peak” about 8173 has come after a long ride up. 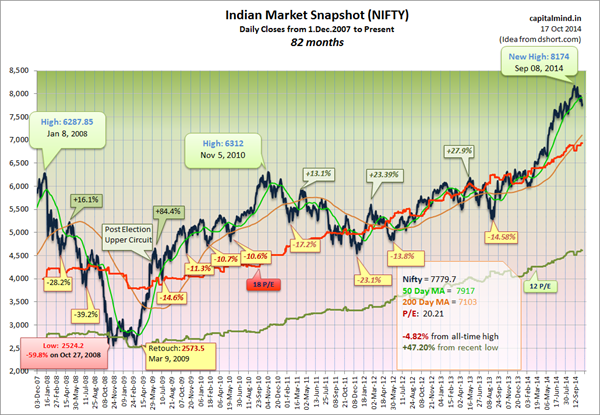 This chart maps all the retracements that are 10% or more. You can see here that we haven’t had a 10% retracement in the last full year – and we have had at least one a year since 2007. It’s really a very non-volatile market.

The market’s at a 20 P/E which is not overvalued but is definitely not fair value either.

Even with the recent fall the Nifty’s just 5% below the peak, which is incredible because it has been the biggest retracement in the last year. And, after March, this is the first time we’re trading below the 50 day moving average.

A correction is, what we call it, a move of 10% above a recent peak. The fall from 8173 to today’s numbers is just 4.82% which means we’re not really in territory that can be called severely bearish or oversold. Don’t believe people who tell you the selling is over – if it indeed is, then it wasn’t that much of a sale.