Here’s wishing you a very Happy Diwali! Here’s the eighth edition of the Capital Mind Prediction Series, which tells you that it’s darn difficult to predict anything with reasonable success. Which is probably why last year I succumbed to the idiocy of making weasel rules – that is, making just two of three elements of Brilliant but Useless Predictions.

What Happened In The Last Year

Firstly, the markets went nuts. I mean absolutely nuts. The one year return, since last Diwali, on the headline Nifty Index alone, is 27% with the Nifty moving from 6,300 to 8,000. This has been a great year for stocks. The Biggest Sector Moves weren’t in the Nifty, really. Smallcaps did the best – over 58% since last Diwali, but Midcaps weren’t too far behind at 50%. The Nifty went up 27%.

Outperforming everything else was Auto, which moved up over 50%. We really don’t know why because car sales have been flat through the period, and even though we’ve seen an excise duty cut, sales haven’t gone up quite that much.

Pharma and Banks were next, with about 40% each. Banking has seen higher NPAs, credit growth slowdowns and in general a lot of uncertainty following the Coal de-allocations and other scams. Yet, they prosper in the stock market – you have been warned that being logical is not equal to getting the most wealth. 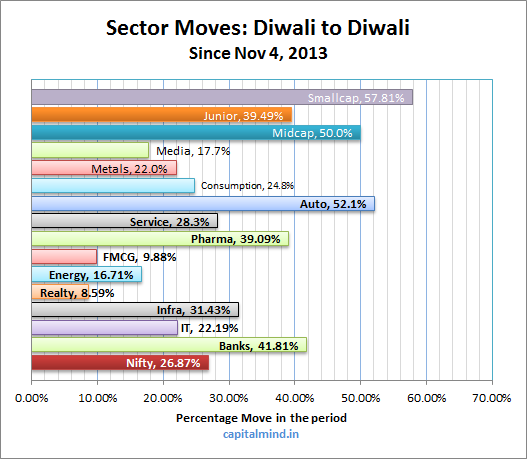 The Losers – on a relative basis (because not one sector has been down) – are Realty, Energy, FMCG and Metals. One can understand with real estate – the price of DLF has fallen, and that is a huge part of the realty index. It’s not apparent why FMCG is underperforming or why the Media sector isn’t as good (considering this has been a great year for spreading whatever word you wanted to spread).

On the Macro front:

Election results in May 2014 were a big surprise, with a huge majority to the BJP. We haven’t had a majority party ruling the government for 20 years or so, which effectively means the end of coalitions and the need for begging alliance partners for approval for reforms. However, with not enough members in the lower house (Rajya Sabha), it will still be difficult for this government to pass bills. That will have to wait till 2016.

The government though has had no breakthrough achievements in the year. The budget in July 2014 was almost a non-event. There have been some noises about clearing roadblocks. There was the great visit to America. There was some posturing along the J&K border about defending ourselves from the shelling from Pakistan belligerently, and building things around the border in Arunachal Pradesh. There has been some talk about easing laws to create companies, and labour law reforms. We’ve been asked to Make in India, but there’s no real reason to do so when stuff is so much cheaper abroad and you don’t have to deal with insane taxation and regulatory requirements.

In a lot of ways, just the relief that this government wont’ screw things up more will probably drive the economy up. But the expectations are very high, and given that the BJP has done very well in almost all elections since the May win, it seems people are placing their bets on the winners. The question now is: how much longer before they deliver?

Yes, Elections were big. But there was no big spending.

The public sector did not return in any real sense. PSU stocks have become attractive, but private sector stocks have done way better. PSU banks have in fact lagged the non-PSU banks, that’s for sure!

Interest rates did rise into April. After that, it was flat. So yes, got that bang on.

The last prediction, I’ll leave to you to determine! We started Capital Mind Premium, which has seen an increasingly great response, and we have multiple great things going. Our portfolio in Capital Mind Premium has a three digit CAGR since it started in December 2013. The site design has been modified to meet mobile requirements and traffic has increased. We’ve been featured in multiple TV channels, and our news and graphs have been seen in more print and online publications. But do let us know what you think!

This should however tell you about the folly of prediction. All we could do was control one variable – the “better Capital Mind” thing. The rest were potshots!

Our Predictions for the Next Year

Have a fabulous year ahead, folks. Stick with us, and we’ll have much better things for you. Like last time, please tell us what you love and hate about us, and we would love to know how we can improve.