Forex reserves at the RBI continue to fall as RBI’s data last week shows the figure dip to a 3 month low at $314 billion.

Part of the reserve dip would be because the USD has been appreciating against other currencies (so if we hold Yen, and the Yen falls against the dollar, our holdings would be worth lesser in terms of dollars) 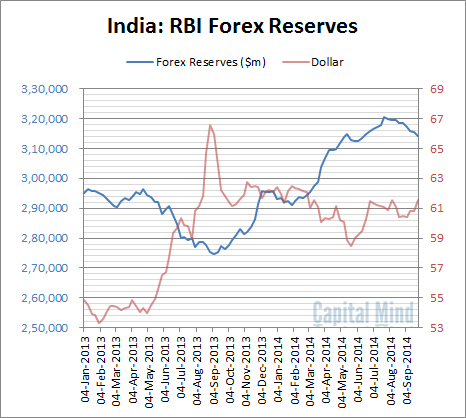 But because the rupee has also been falling against the dollar, it could be that foreign investors are pulling out capital in the last month, and selling rupees to buy dollars. Reserves can also go down when the RBI sells dollars.

RBI sells dollars only when the internal market prices show a deep fall beyond levels they find acceptable. We don’t know what such levels are, but we at Capital Mind had assumed that Rs. 58 to Rs. 62 is the range they like, based on past interventions.

However, the RBI also buys and sells in the forward market, and if you account for those obligations (we know only with a lag of two months) we have a little more. Earlier, our forex reserves, net of forward obligations were substantially lower. 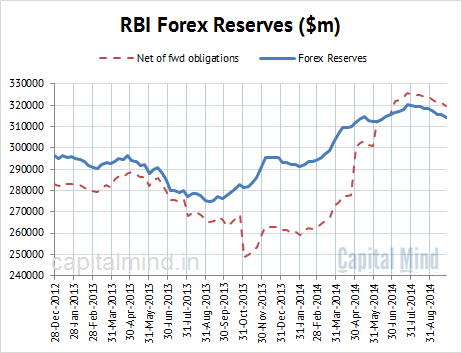 While the drop in Forex Reserves is small, it could be a pre-indication of exiting foreigners. If this sustains, stock markets will surely be hit.