Following up on our earlier posts on Mutual Funds (Read “Why AMFI Should Not Ban Upfront Commissions” and “Mutual Funds Hike Exit Loads, Hoping This Time Investors Will Stay”), we take a closer look at the monthly performance of Mutual Funds.

The data that is used in our analysis provides a monthly look at Total Inflows, Redemptions/Repurchases Assets Under Management (AUM) and a few more metrics. The data was obtained from AMFIs database.

Over the last 15 months, AUM of Equity and ELSS–Equity based MFs have been increasing: 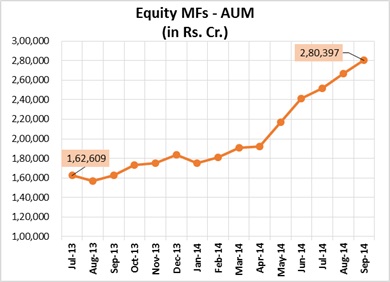 Assets Under Management of Mutual Funds gives us a glimpse into the performance of the underlying assets, as well as Net Inflows into the MFs. Net Inflows is calculated as Total Inflows less Redemptions/repurchases. To truly gauge the performance of the underlying assets, we have to discount any additions/redemptions from the MFs during this period. 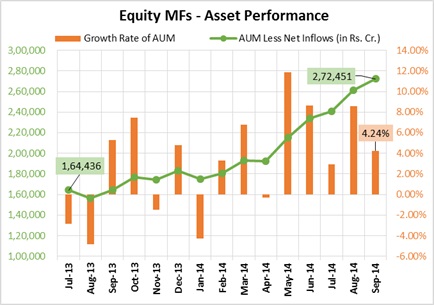 As we can see, the performance of MFs have gone through ups and downs (even though the sample size is only 15 months).

What would be interesting to note, is how much of the increase in AUM can be attributed to market returns, and whether or not they have been able to provide better returns. If the markets were going down, and despite this, if the MFs have managed a near 66% performance, the inference would have been different. 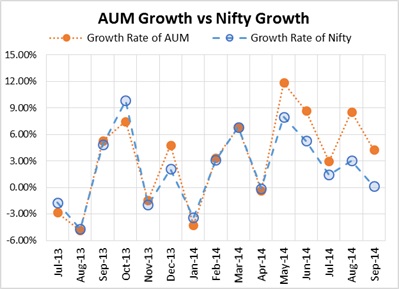 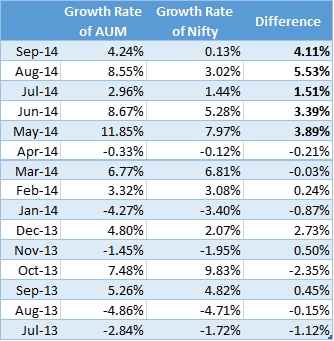 That basically means, that from May onwards, comparing an investment in a Nifty-mirroring fund and your average equity Mutual Fund, returns on the MF would have been higher by a significant amount.

Mutual Funds seem to be setting off into a bull-run of their own. Will the optimism last? The more pertinent question would be regarding investor appetite for Mutual Funds.

Looking at Net Inflows over the same period: 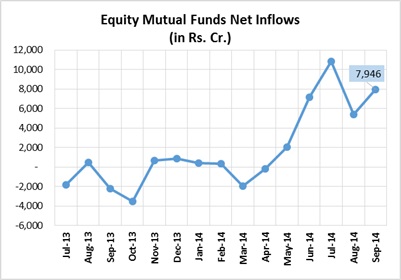 The rate of increase in Net Inflows shot up since April 2014 (barring August, which could be due to excessive redemptions).

Since May of this year, the markets have been on quite a high. As election fever gripped the nation, the markets paralleled that optimism, and the Nifty started to touch new heights. Mutual Funds are mirroring that optimism, and AUMs and Net Inflows are on the up. With their rates of return out-stripping that of the market, Mutual Funds are definitely more appealing to investors now; although we will have to wait and see if this resurgence will be sustained.