The markets have seen quite some euphoria over the last few months. Since May this year, the Nifty has been hitting unprecedented levels, touching an all-time high of 8173.9 at the close of the day of 8th September. 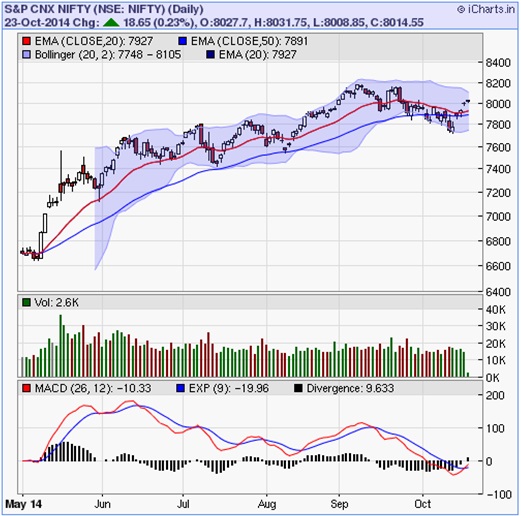 Ever since Election results came out in May, the markets seem to have taken very kindly to the mandate. The Sensex too saw an all-time high on the same day, hitting 27,354.99.

Since the Nifty is representative of all the industries put together, it would be interesting to see, sector-wise, which industries have seen maximum upswing during this period, and which have under-performed. Some sectors seem to have reacted very positively to the arrival of a new government at the centre, while others have under-whelmed. We do this by comparing the Nifty to other industry-specific indices (e.g. CNX Midcap, CNX Energy, CNX Pharma and so on).

Since we’re interested in the movement of the shares since Election Results day, we tweak our analysis slightly. Taking the levels of each of the indices on May 16th as the baseline, we track the movement of the index-levels from these base values, on a daily basis. The results are quite surprising.

Nifty vs Midcap vs Smallcap 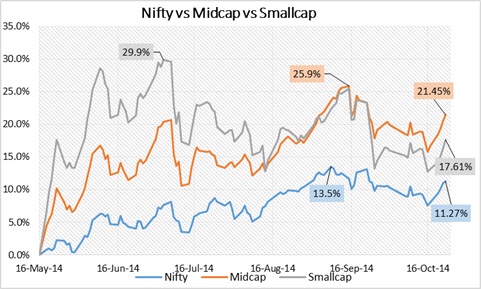 Small caps have actually been on a downtrend since July, while mid-caps and large caps rose all the way into September, and have fallen a little from their peak since.

Since small caps are usually the haunt of retail investors, and mid+large caps that of the institutions, the markets seem to have lost retail attention and become more institution- focused in the last three months.

Nifty vs Auto vs Banks 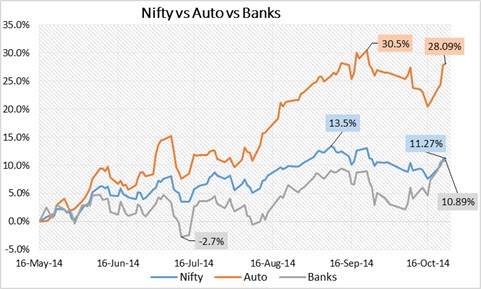 Auto has outperformed massively, right from elections and currently beats the Nifty by more than 16 percentage points! Banks though have under-performed the Nifty since elections.

Nifty vs IT vs Metal The Metal sector is currently up by a paltry 1.96%. The Metal sector seems to have performed in stark contrast to the Nifty. While the initial few months post elections saw the Nifty gain steadily, the Metals sector zoomed ahead, recording a tremendous 26.8% increase at one point (9th June). However, as the months went on, they started moving in a downwards trend, especially from early August onward. The Metals sector is currently lags the Nifty by more than 9 percentage points!

The IT sector on the other hand, has been seeing steady gains since May. Although IT stocks did fall off their peak slightly since late September, they still outperform the Nifty by a shade over 7 percentage points.

Nifty vs Pharma vs Realty The Pharma are among the best-performing stocks since the elections. Pharma stocks have been on the up since May, and they have performed much better than the Nifty. At one point in time (30th September), the CNX Pharma was at an astounding 40.9% increase! They have truly outshone the Nifty and the CNX Pharma is currently at 33.6% above its base value.

The onset of a new government at the Center, coupled with the promise of a slew of game-changing policies has definitely improved sentiments in the market. The Nifty is currently at 8014.55 (End of Day 23rd October); an increase of 11.27% above its May 16 levels. However, based on our industry-wise analysis, it is fairly evident that some of the industries have performed differently as compared to the market.