DLF and six of its directors have been banned from accessing the securities markets for three years. Because they lied during the IPO.

The details are fascinating. This SEBI report has phenomenal investigative details, and let me try and decode this for you: 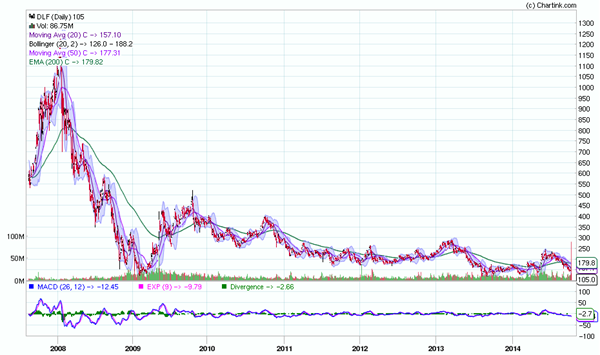 DLF has seen two adverse orders against it, apart from this one. It’s land allocation in Wazirabad, of 350 acres, has been cancelled. And then, it has to pay a penalty of Rs. 630 cr. according to a CCI which has been upheld by the Supreme Court. This order from SEBI means that the company can’t access the debt or equity markets for three years. They will of course appeal, but that delays the process, and it could be that the company will get no respite if it needs avenues to raise money.

Most importantly, it cannot unload its commercial properties through REITs by selling their stake in commercial property which they own, and passing over the rentals to a REIT which will then be bought by investors. REITs would be most relevant for DLF who has a large portfolio of performing commercial real estate in places like Gurgaon.

The stock is such bad state that it is almost incredible that it retains a position in the Nifty. It now has a free-float market cap of just 4695 cr. (75% of this company is owned by promoters). That is the lowest free-float market cap on the Nifty, so you can expect it will lose that exalted position if the stock remains at this level. With a valuation of Rs. 18,700 cr., DLF has lost a market cap of over 7300 cr. just today.

DLF will appeal against this, and to be honest, it’s not yet apparent there was something sinister they were hiding. (That’s also why there’s no fine, and there’s only a ban) The SEBI order doesn’t go into that detail – it says that DLF didn’t reveal the information, and the fact that they used the housewives and the quasi funding through employees almost definitely means they were hiding this purposely.

But in any solid investigation, it would be necessary to prove some layer of further wrongdoing that hurt investors. For instance, was there a related party transaction that involved siphoning out money from the company, which would make the case more watertight? (remember, if the land is owned by the “housewife” company, and a sharing agreement with DLF exists, then part of any revenue could flow out and get appropriately distributed to management and so on, which would be bordering on the illegal). If DLF were to appeal, it would be prudent to explore those avenues and find out if there is more out there than is being revealed right now.

– SEBI’s order offers ugly evidence of how some in India Inc. do business
– The ‘sham transactions’ documented in the order don’t help India Inc’s opposition against Parliament’s decision to restrict the layers of investment companies to 2 (Companies Act, 2013)
– All this has come to light 7 years after DLF went public and the complaint was filed. This delay, whatever the reasons, cannot be condoned.
– Eventually if its promoters can’t raise money then DLF suffers and public investors of DLF suffer as well.

Disclosure: We (thankfully) do not own any DLF shares. Or property. Not even our wives do. Even if they are housewives.