Venus Remedies, a pharmaceuticals company listed on the BSE and NSE, saw their shares plummet nearly 20% from yesterday’s close of Rs. 378.50 to Rs. 302.80 (as we write this). Charting the stock over the last few months:

And that after a stellar run saw its share price touch Rs. 381.75, a 52-week high, on the 15th of September. The spurt in their share price can be attributed to 2 major announcements:

Earlier today (16th September), Crisil downgraded their ratings on the bank facilities of Venus Remedies down to a “D”. As per Crisil definitions,

Crisil expects the company to default imminently, if it hasn’t already. We looked at Crisil’s report to ascertain the reasons behind the downgrade. Strangely, they say:

“The ratings continue to reflect VRL’s comfortable financial risk profile, marked by a healthy net worth and strong debt protection metrics. The ratings also factor in the company’s strong presence in the high-value critical care segment and the healthy growth in its domestic and export sales. These rating strengths are partially offset by VRL’s working-capital-intensive and small scale of operations in the overall formulations market.”

How does this work? They are going to default, but they have “healthy growth”? (We are not enamoured by rating agencies, as you might have guessed)

The downgrade was applicable to all the bank facilities that VRL availed, and amounts to a total of Rs. 265 cr. The rating implies Rs. 265 cr. is under serious threat of not being repaid. To break-down their debt: 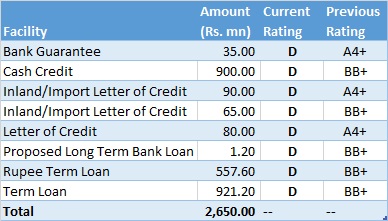 According to the report, the downgrade was due to,

“Delays in repayment of term loan by the company driven by a stretched liquidity. VRL’s stretched liquidity is on account of the significant increase in total cost of the large debt-funded capital expenditure over the past one year and high working capital requirements. The company is undertaking capex towards setting up marketing office. The total cost of this capex is estimated to have increased by about Rs.100 to 150 million. In addition to the above company’s liquidity has also deteriorated on account of the high working capital requirements reflected by inventory of about 131 days as on March 31, 2014.”

Having a look at their income statement, we see that their interest coverage ratio has been varying: 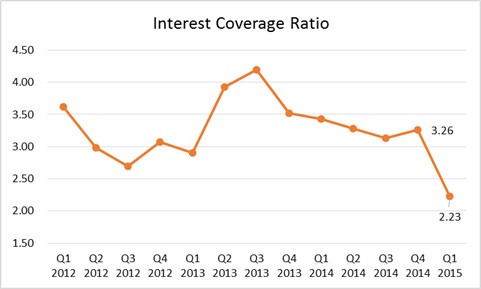 Things do look bad. Their Interest Coverage Ratio (Profit before Interest & Taxes divided by Interest charges) has reduced sharply from last quarter. At 2.23 they pay 44% of their pre-tax income as interest.

Venus has been in trouble earlier, having hedge funds really ticked off with them for not paying up on Foreign Currency Convertible Bonds. (FCCBs). They settled part of that claim but still have $4.59 million worth FCCBs convertible at Rs. 364 per share by Feb 2015. Basically if the share price less than Rs. 364, Foreign investors are unlikely to convert and will demand their money back – which would add another Rs. 27 cr. to their payables.

Interestingly, they made an EPS of Rs. 54 last year, which would make the share a fairly cheap one. But what is cheap often hides things you don’t really know – so is it really so that the company is in trouble?

The official response of Venus Remedies is that their loans were for research which have long gestation periods, and that they have asked for a postponement for repayment of principal for 2 years without any sacrifice (i.e. the bank loses nothing). (Thanks to commenter Krish for a more detailed link)

Update: From their annual report, they have four banks: SBI, IDBI Bank, Allahabad Bank and HDFC Bank. We don’t know how much they owe to whom.

We might have another candidate for Corporate Debt Restructuring.

Disclosure: We have no holding in the stock at any time in the past 30 days and do not plan to purchase this stock in the immediate future.