The Supreme Court has ordered that 214 our of 218 coal block allocations since 1993 be “quashed”. Only about 46 of these blocks were actually operational, and all those that were not operational cannot be made so (because they are now illegal).

That means the companies that got them are in trouble, for two reasons:

Even if this defense is overstating the case, the numbers in this are huge enough that even half their value would be scary. Even a 100,000 cr. hit to banks means that more than 15% of banking capital will be eroded!

Why Are The Coal Blocks Illegal?

The case is long and shady. The main point here is that these allocations weren’t actually following the principles of justice or equitable distribution. These blocks should have been auctioned out – they weren’t, and were given “arbitrarily”.

This went through a few cases, and the CAG had a detailed report, saying that these non-auctioned blocks involved a loss to the government, adding up to Rs. 295 per ton. This much was a “windfall” gain, said the CAG. The court has agreed, and that much has to be paid back.

(I’m not sure the courts are considering the time value of money and that Rs. 295 ten years ago is not the same thing as Rs. 295 now, but let me not get all mathematical on you)

Obviously the big impact is to the power producers. Here are a few charts that show the carnage: 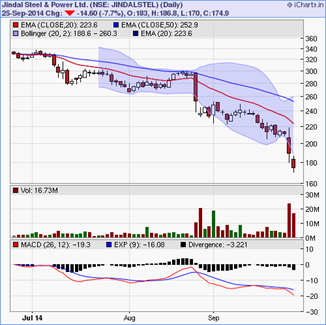 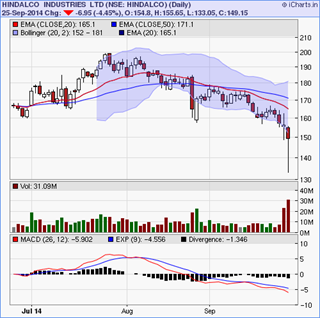 Hindalco, which had clawed its way upto Rs. 200 in July, has fallen to below Rs. 150, even as it had a steep intraday fall today.

(Read: Rulings on Coal and Coal will take their Toll) 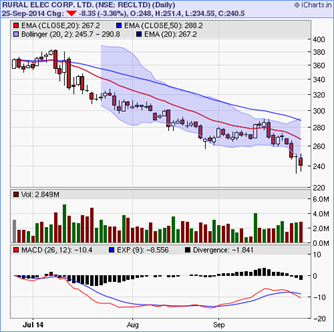 Rural Electrification Corporation (REC) has fallen about 10%. This company finances the power sector. It doesn’t have to pay fines, but the fear is that the companies or projects it has financed are in trouble. 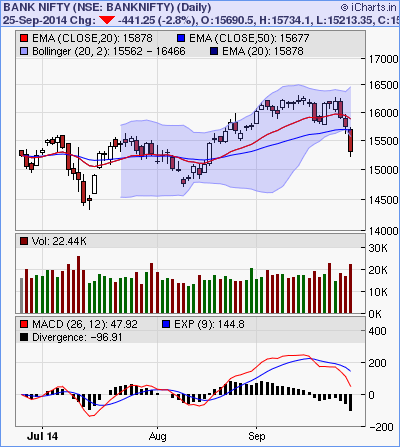 Banks have fallen off a cliff. Every bank has some exposure or the other to the power and steel sectors, and the fall in three days, of about 1,000 points in the banking index, tells you how big this situation is.

We have a more detailed post on the impact on Coal India. (which is largely positive because Coal India will get all those coal blocks deallocated until fresh auctions are done).

The impact remains negative for banks currently, but it will be a good thing to clean up the system. Banks have other mechanisms for recovery (there are power plants, steel mills and promoter assets) and of course, there will be fresh auctions for the coal blocks which, if purchased, can make the plants operate again. However, this will involve a capital hit – we don’t know how much just yet.

The Problem of Going Back Till Forever

The problem is that the cancellations go back all the way to 1993. Imagine you got something allocated by the government even before there was a policy for such allocations. You invested money to get the coal out and sold it, and now, 21 years later, you must pay a fine because supposedly the allocation was illegal in the first place.

At some point we must have a statute of limitations. Even if it means some bad people will get away – remember, even now the UMPPs have gotten away. The point is that if you can’t be sure of a government decision today and it can be upturned by courts two decades later, then would you really want to invest?

Anyhow, this remains the only major issue, but if you look at the situation in detail it remains a mess involving corruption, shady deals and dirty politicians/industry. The hope is that that the judgement is a one-off – it’s quite unlikely that anything being done now, like spectrum auctions will remain legal even many decades later. (But you never know!)