On Wednesday, 24th September, the Supreme Court upheld its August judgement to scrap 214 out of the 218 coal blocks that were allotted since 1993. This was widely expected, and resulted in share prices of big players in this sphere, dropping massively. The worst-hit include Jindal Steel & Power, Hindalco, Usha Martin & Monnet Ispat to name a few.

The remaining 4 blocks that were not repealed (government-run, non-Joint Venture allotments) belonged to NTPC, Steel Authority of India Ltd and 2 to the 4,000 MW Sasan Power Plant (owned by Reliance Power) in Madhya Pradesh.

The SC has given the affected companies 6 months to cease operations. Additionally, they will incur a penalty of Rs. 295/metric ton of coal extracted, which will have to be paid on or before the end of the year.

Wow. At those rates, the penalty itself will be more than Rs. 8,083 cr., based on the approximate figure of 274 million tonnes that companies have mined thus far.

40 of the 214 are currently active; coal is being mined from them as we speak. 6 coal blocks can produce coal pretty much immediately. Power plants here are already facing a severe coal supply crunch; more than half of our thermal power plants cannot even last a week with their current stocks!

In their judgement, the SC also recommended that Coal India Ltd be allowed to run these 46 coal blocks until they are ready to be auctioned. This news has thrust CIL share prices upwards by 7.57% from Wednesday morning. Shares of Coal India Ltd (BSE: 533278; NSE: COALINDIA) surged for the second day in a row to reach an intra-day high of 358.90. 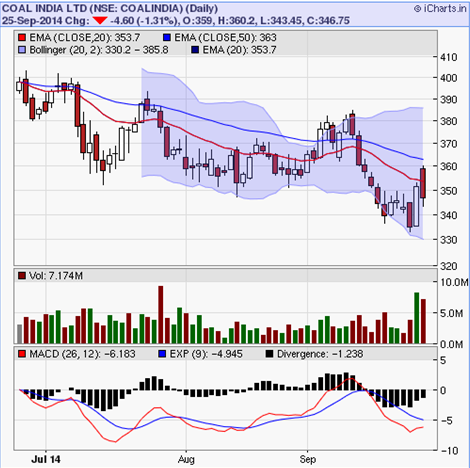 Things do look good for CIL. What can we expect going forward?

This bodes well for CIL, which has also received flak for its apparent inability to meet demands till date.

Disclaimer: We do not own any positions on the stock.