From more slides that released today, as part of Raghuram Rajan’s speech at the FICCI-IBA Annual Conference: 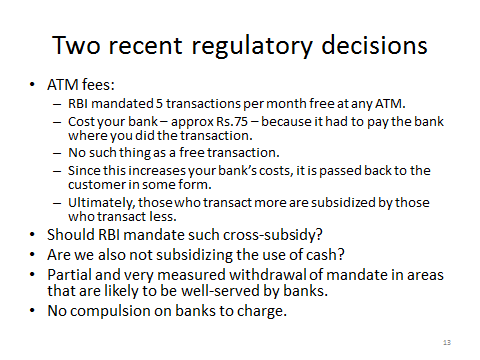 While I’m all for opening up regulation, I think this is not well thought through and listens only to bankers. Let me explain.

Banking: Not A Sum Of Profitable Parts

The banking system does not operate in silos. It’s not like every single action is to be profitably on its own. You can’t be productive every hour of the 24 hours of a day, it’s the sleeping in the 8 hours that lets you be productive in the remaining 16.

In the same way, it cannot be – and should not be – that the ATM or cheque clearing charges should be paid directly by customers to make those operations "profitable". These operations are part of the reason why people trust banks – so that when it’s time to take my money out, I can do it without a fee.

ATMs may cost banks, but it’s because they have ATMs that we keep our money with them at 4% interest when we can get 9% elsewhere. That 5% difference or spread, system wide, should allow banks to subsidize the cost of ATMs, no matter where they are used. And indeed, after looking at the ludicrous profits banks make, this is true.

Today people have become banked because of this freedom. And now, to allow them to charge people will push people to distrust banks again. That means more people will just keep cash with themselves rather than in banks. And this is undesirable.

It doesn’t cost banks much to get a non-financial transaction (read: no money exchanged) through an ATM. The interchange costs are piddly, so we should not be charging anyone anything for something that’s been largely setup and managed by the NPCI for a cost that’s a fraction of a rupee per transaction.

Yet, it’s RBI’s folly that they have decided that interchange fees between banks cannot be less than Rs. 8 (or around that) for a non-financial transaction. To allow white-label ATMs they mandate that much as the minimum. This makes no sense whatsoever – a non-financial transaction should not have to be charged at all and should simply be the cost of not having a teller around.

(Imagine if your bank decided to charge you for it’s server hosting costs when you use netbanking!)

And Where’s the Competition?

If RBI were to ease this regulation they should have five hundred banks vying for customers to bank with them. Where are these banks? Nowhere, because the RBI won’t allow new banks to happen.

Yes, they’ve said they will happen and granted one bloody miniscule license after months of prodding around. Come on.

Does it Add Up?

Let’s look at the figures:

These are just base figures. If you do the math, you find the spreads are larger. And the amount in savings bank accounts is much greater than the "demand deposits" figure mentioned (as banks attempt to calculate only amounts that are likely to be withdrawn from SB accounts as the demand part of the SB account; the rest is a "time deposit". So, your minimum balance isn’t counted as a demand deposit). Thus, the profit per ATM is even higher.

Such silo thinking will refute whatever logic RBI is being given by bankers to justify their itch to charge customers just about anything.

What Should The RBI Do?

Understand the non-silo part of the overall banking equation and how this will create mistrust.

Reduce friction in card based payments and make such things more trustworthy so we don’t need ATMs, rather than ask banks to charge for usage.

Bring back regulation that requires banks to keep own-ATM transactions free, unlimited until they have fostered competition.