RBI has revealed in it’s monthly bulletin that it has bought over $5bn in the forex market in July 2014, and another $5bn in forwards. This adds up to the biggest purchase year in both cash and (cash+forward) terms since 2007-08: I may be the only one that tracks this tiny statistic, but I’d like to thank the RBI for giving us detailed information on the maturity profile of the forwards they own.

The maturity classification tells us how much RBI has as forward obligations in four buckets – less than a month, 1-3 months, 3 months to a year, and then more than one year. We know that the maturity obligations due to the FCNR swap in November 2013 added up to about $26 billion. (This means RBI has to pay $26 billion out of its reserves in end 2016)

To offset that, RBI seems to be buying forwards that mature around the one-year time frame. I think their idea is to roll these over, or keep them in order to maintain higher forex reserves. However, at such times they will need to print rupees, if they do not roll over these obligations. 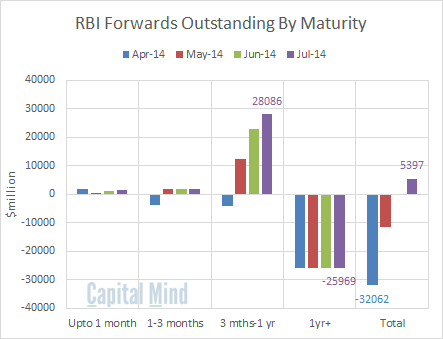 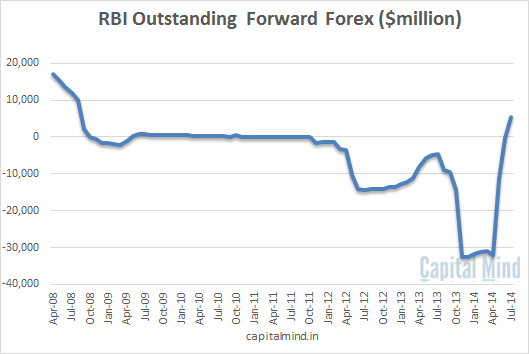 Impact: This has multiple interpretations

The RBI has been cleverly raising forex reserves, selling government bonds and buying dollar forwards to avoid volatility in the forex and money markets. It’s managed to do this without massively increasing money supply.

However, we have also not had a large crisis, or sudden outflows; it remains to be seen how the RBI will react in such a move. Earlier the RBI has been very reluctant to sell its precious reserves to protect the currency – this time it doesn’t seem so.

Whatever it chooses to do, it now has the ammunition to do either – protect the currency strongly, or to let the rupee weaken as much as possible.

If you are a currency trader, you probably hate this – RBI is the biggest kid on the block and can wallop any trend trader out of existence.