Update: Something is seriously wrong with this data. It makes no sense that LIC is 20% of the Sensex Market Cap, to be honest. At best, it’s likely to be 10% or so. We’ll leave the post as is, but beware of coming to conclusions!

From a tweet by the good @monikahalan I decided to chart LIC investments (total) in different companies: 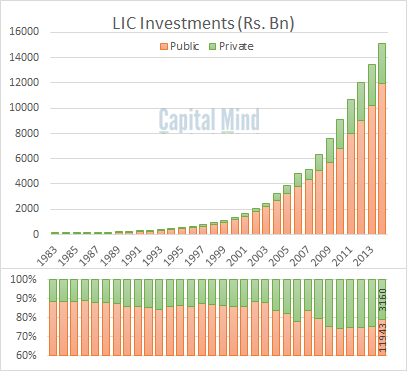 The bottom chart shows you the percentage in public versus private sector companies. (These are total investments, either as loans or as equity, though loans account for only 400 billion in FY 2014)

The total investment is Rs. 15 trillion, which is a massive thing for a single investor!

Most of the investment is in the public sector (11.9 trillion), which was above 80% of the total till 2007, and has dropped consistently since. And in the last year, LIC’s purchase of public companies went up.

We assume this is the total value of the investment (not just the amount of money paid). If you plot that against the total Market Cap of the Exchange, as a percentage, here’s how it looks: 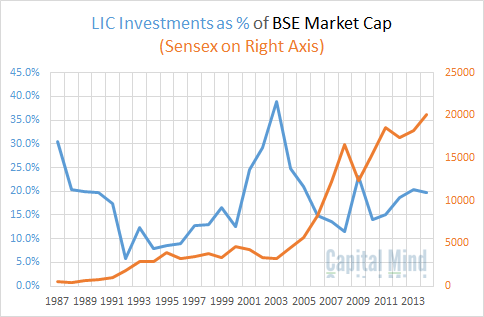 It’s almost like when LIC buys and becomes more than 20% of the market, it’s a good time to buy. And when they are too low as a percentage, it’s probably not such a great time to buy.

We don’t have current data, but it would be interesting to see how much of the current market is owned by LIC.

Note: This data does look a little strange, as @VetriSmv points out. Promoters are 50%, FII 24%. So how can LIC be 20%? Either the data is wrong, or the interpretation that "investments = market value of holding" is wrong. We’ll investigate.