Japanese GDP data for the 2nd quarter of the year is out and they do not look too good!

The Japanese economy has been seeing a steady upswing since its nadir in Q1 2009. From then on, the GDP saw an average quarterly growth rate (annualized) of 0.91%, with a few downturns along the way.

All amounts below are in Trillions Yen unless otherwise stated. The data was obtained from the website of the Cabinet Office of the Japanese government.

Looking at the growth rate and the absolute values of real GDP over the last 10 years: 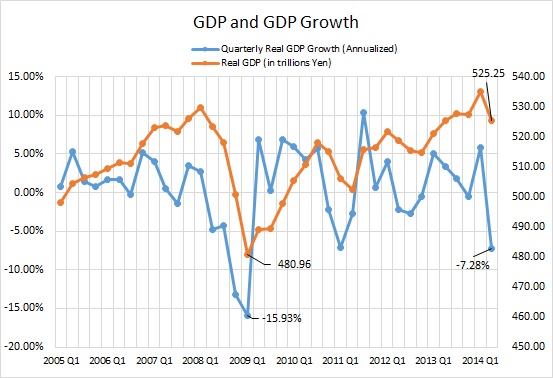 It is pretty evident that Q1 2009 was a torrid time for the Japanese economy. Not only was GDP at a low, even the rate at which GDP contracted was at its highest (15.93% annualized)!

Digging deeper into the main reasons behind such a steep decline, we see that private consumption, which accounted for a little over 60% of the GDP in the previous quarter, dropped 5.12% from 321.73 trillion yen last quarter to 305.25 trillion yen for Q2 2014.

This drop in private consumption can mainly be attributed to an increase in sales tax from 5% to 8% that came into effect in April 2014. This expected increase in sales tax ensured that the Japanese public advanced some of their purchases before April, effectively furthering the gap between the metrics of Q1 and Q2 2014.

Now here’s the kicker; PM Shinzo Abe and the government had earlier decided to further hike the tax to 10% in 2015. However, considering the adverse impact the 1st hike has had on the economy, the government is expected to re-visit the decision in December.

Will the hike be delayed, or will the government go ahead with it and announce simultaneous fiscal measures to combat any further GDP contraction? We shall wait and find out!