Every quarter all banks are supposed to provide a list of Wilful Defaulters to CIBIL (and other such agencies). A wilful defaulter is someone who can, but will not repay his loan. There are serious consequences of being listed as one, such as not getting access to any other loans by any financial institution, and that directors are "not fit and proper" to serve on company boards.

It turns out that a listed company, Orchid Chemicals, has been listed as a Wilful Defaulter at the end of the quarter ended Jun 30, 2014. 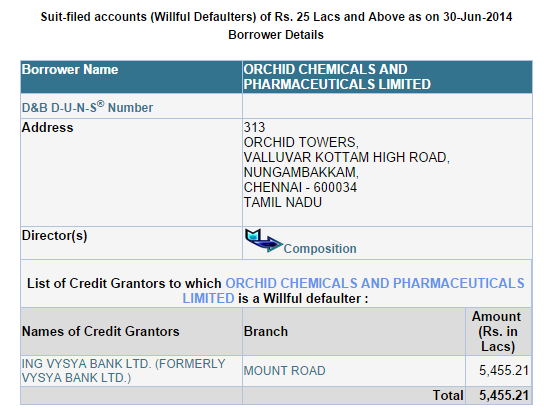 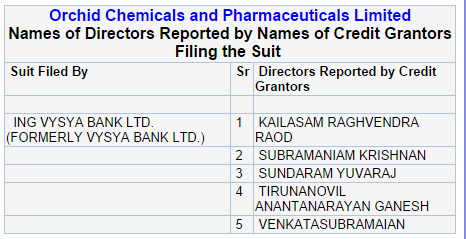 These are the same as the directors of Orchid Chemicals, the listed company. (K. Raghavendra Rao’s name is spelt wrong)

What about the CDR?

Orchid recently went through Corporate Debt Restructuring (CDR) which it has said (in a report) that has been implemented in July 2014. The wilful defaulter list is as of 30 June 2014, but why did ING Vysya report it as a wilful defaulter if a CDR was in progress?

The amount is not that much; just 54 crores. (In comparison with a Bhushan Steel’s massive 36,000 cr. loans this does sound insignificant).

We are awaiting a reply from the company about this issue, and at the time of writing this post, haven’t received a reply.

There are other listed companies noted as wilful defaulters – like Winsome Diamonds, Sterling Biotech, Parekh Platinum and so on. Many of them trade at very low prices, and are "penny" stocks for the most part. Orchid seemed like a big anomaly!