India’s Index of Industrial Production (IIP) fell to a four-month low of 0.53%, after three strong months. The most hurt was manufacturing which was down to -1.0% after strong positive moves in the last few months. Another way to look at it, the Use Based Indexes: (Click for larger picture) 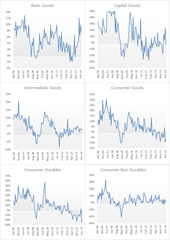 Consumer durables is the worst hit with -20% growth year on year.

While this is definitely not impressive it only really means that the manufacturing economy hasn’t picked up. The service economy has remained strong. The IIP has not been a barometer for the economy for a while now, and while this government wants to revive local manufacturing it is not currently happening.