Everyone who’s rich tells you they didn’t really care about the money when they started. To a large extent, and to most of us that struggle with just carrying on our existence, this is bullshit. We’re all looking for that elusive early retirement, that point at which we can say something to the world with the acronym "FY". And for most of us, this means money.

You could live your life in a noble way and not care about the kind of money you need to actually do the FY thing. Because, let’s say, your ambition is to not have children and live in a cottage while fishing off a small island in Lakshadweep. This would be great and require little or no cash other than to actually get there. I would envy you and tell you to immediately stop reading further.

Now, all the rest of you have worldly desires and responsibilities, and need money to live comfortably. How much, though, does it take?

I thought about this recently, because in this whole race it was suddenly becoming more about playing the game rather than finding that point at which we say we’ve won. We worry about money even if we have money; we worry that if we did have more we could do so many things. How much, though, is "enough"?

I’ve had various answers over the years. I always knew I needed some money. At some point I randomly decided that I needed 10 crores, because that would be awesome. This has been a fixed number for nearly 14 years (I decided the 10 crore number sitting in a beach in Goa, at midnight ringing in the new year, with no mathematical basis whatsoever)

But now, I’m older and need a justification for everything. (Isn’t that sad? Whatever happened to just winging it? But I digress).

To be very comfortable, I’d like a nice house. Not necessarily big, but definitely one with an outdoor garden, and a fancy car and all that. Let’s say this house costs Rs.4 cr. (I’m never ever going to retire in Mumbai – that would be FM, not FY – so it doesn’t matter to me that 4 cr. buys you approximately half a matchbox there)

If I spend Rs. 100,000 a month today, a luxurious lifestyle – allowing me to travel to New Zealand whenever I wanted, for instance – would probably need me to have Rs. 500,000 per month.

At those levels, inflation doesn’t hit you quite as much, so costs probably go up about 6% a year. 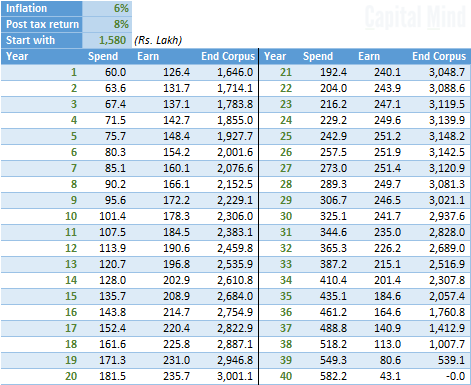 So, to retire to a life I would call luxurious, I will need Rs. 20 cr. today.

In a way that helps temper ambition. That’s the money I need. Anything beyond that is a bonus, but it’s not really necessary – in effect any money more than that should be considered as a responsibility to help others, to better the world and all that. That’s really a lot of responsibility, and there’s a part of me that wonders if it’s really something I want to shoulder, but it would be criminal to avoid it.

I don’t know how to reach this goal, but I know that what I’m building – the Capital Mind business – has the ability to take me there. It comes with very little cash flow (nearly no salary or income while I spend energy building it) but it does have that pot of gold at the end.

I could make do with a lot lesser, of course. But this is not about making do. It’s about Effing…er, the absolute FY principle.

To others it may mean stock options at your job, or the prospect of earning a truckload of money as a salary. But whatever it is, money isn’t the end goal by itself – it’s just a milestone that allows you to do what you really want. To everyone it’s different; if you want a Bentley, your FY requirement just went up another 5 cr.

But however you go about it, it’s useful to know the number that you really want. You may never achieve it – many of us don’t, and many of us don’t want to say FY either – but keeping that goal achievable makes life substantially more exciting.