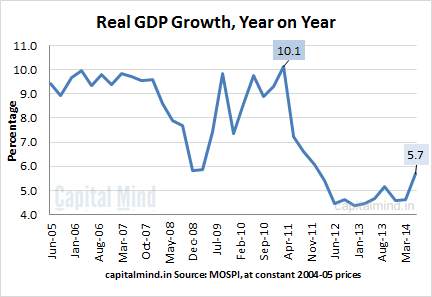 This comes with a stellar performance from manufacturing, which brings a +3.5% to GDP after many quarters of contraction, and mining, which too returns to a positive growth number at +2.1%. 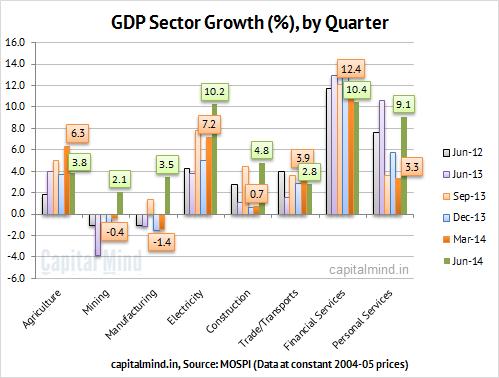 The biggest were Personal services (grew 9.1% in real terms) and construction at +4.8%.

Lower in terms of relative growth were Financial Services (lowest in six quarters) and Trade and Transport (lowest in four quarters). Agriculture too didn’t do that well.

While these are total growth numbers, the absolute numbers for mining and electricity are tiny compared to the others. If we look at how much each contributed to the 5.7% growth: 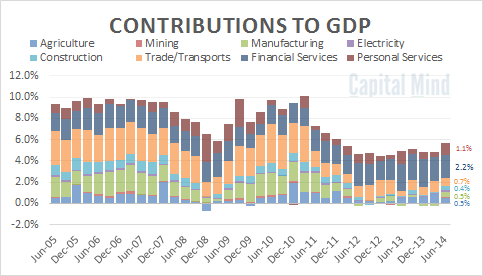 As you can see, it’s the manufacturing and Personal Services that have gone up phenomenally, which Financial Services has actually reduced its impact. Construction too made a a decent improvement, contributing 0.4%.

From a component perspective, the Government helped hugely: 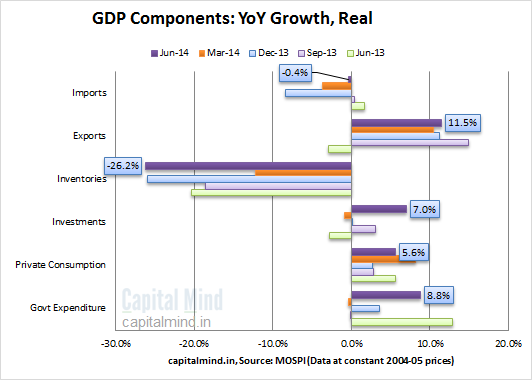 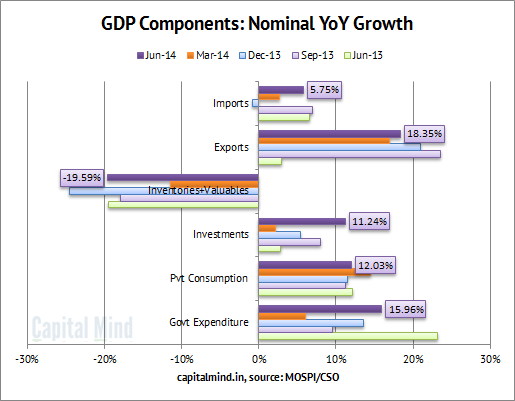 Private Consumption is the biggest element, 60% of our GDP. Growth there will easily define our GDP growth.

The first graph is the “Real” growth (i.e. net of inflation) and the second one is the nominal number, which is basically the actual underlying growth number, which has the inflation number built in.

This might have been because of elections. But note that it was still lower than the corresponding growth last year (of >20% nominal).

To compare growth before and after inflation, we must plot real and nominal growth in the same graph: 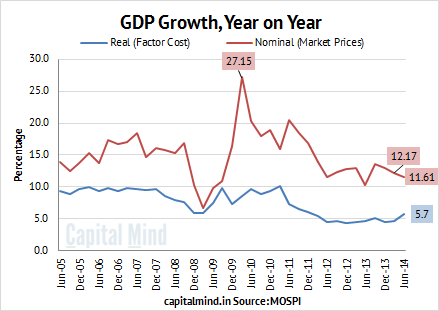 While real growth has increased, nominal growth has been on a downtrend. Fortunately the first quarter of 2013 (Jun 2013) was a down-spike, which cannot hope to be replicated in Q2 (Sep 2014).

In fact, at current levels of growth are we likely to see a high nominal growth number? Remember that the base is higher in Q2 2013, which was +13.55% nominal, driven by a massive 23% increase in exports, after the rupee hit rock bottom at 68 from 55 in the quarter.

With a higher nominal number last year (but a lower “real” growth number) nominal growth numbers might not grow quite that much. if we grew 10% and had 5% inflation (we have at least that much), then real growth will be at 5% or lower, which is lower than the current quarter.

It’s going to be a challenge. In fact, given the dropping levels of growth of financial services and the ongoing crisis situation in coal allocations, the bad monsoon and international cues, this quarter’s +5.7% might be difficult to beat in the next two.