As Forex Reserves Rise to $318 billion, we note that the reserve build-up has flattened a bit. 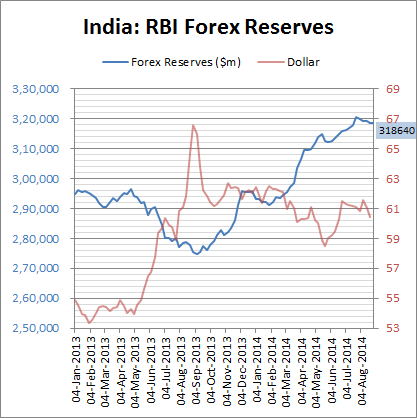 However in the longer term, the current dip could be just noise – the trend is up since August last year. 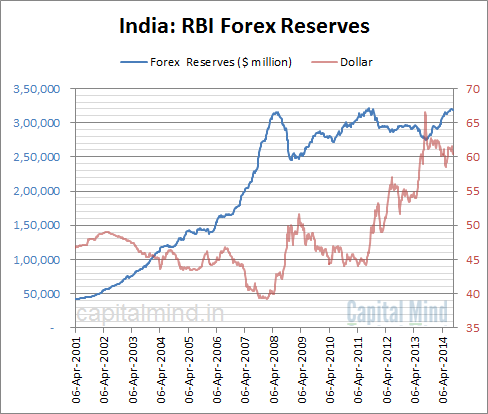 This much forex reserve increase should have led to inflation. Because to buy dollars, RBI has to print rupees. But Rajan’s RBI is different, and has been reducing the holding of Government securities to see that overall money supply is not impacted much.

(RBI’s balance sheet consists of assets and liabilities. The liabilities are largely the money they print. The assets are things like government bonds and forex reserves. If they increase forex reserves, the balance sheet size goes up, which can stoke monetary inflation since the total money supply in the country goes up)

Here’s a chart of the two big assets: Forex reserves (in rupees) and government bond holdings (effectively RBI’s claims on the government). Let’s look at how they have changed RBI’s balance sheet in FY 2014-15 (After April 1, 2014) 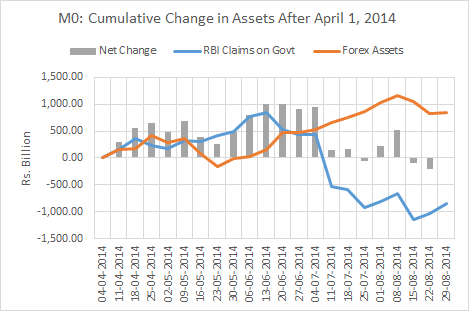 What’s also good is that RBI has cleaned up the forex reserve forward situation. It had obligations of selling back dollars in 2016 (due to the FCNR Swap in 2013). This forward obligation reduced the forex reserves (effectively) by about 10%, or $30 billion. But they have now set up other positions to offset this forward sale (probably a shorter term forward purchase) which means forex reserves are actually up and not just a financial shenanigan. What we must watch for: